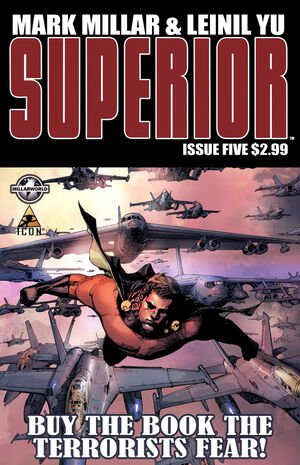 The President has asked him to win the war in Afghanistan, the UN has asked him to feed the starving and the world needs saving 24/7. But Superior doesn't even break a sweat. He can handle all this in stride until his past comes catching up with him and he finds out why a 12-year-old boy with special needs was given these powers in the first place. This is a must-read issue where the mystery that has been plaguing fandom for the past twelve months is finally revealed in a shocking twist.

Retrieved from "https://heykidscomics.fandom.com/wiki/Superior_Vol_1_5?oldid=1475018"
Community content is available under CC-BY-SA unless otherwise noted.