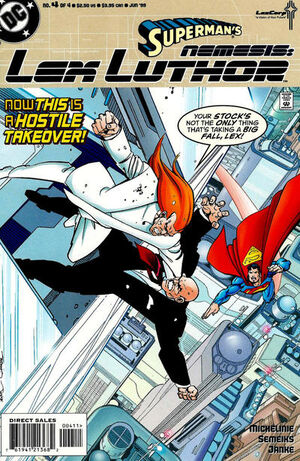 Appearing in "The Triumph of Tragedy"Edit

Synopsis for "The Triumph of Tragedy"Edit

Lex doesn't pull the trigger, instead he pulls it on Krisma. Naturally the gun isn't loaded. Krisma uses his powers on Lex and gets him to spill all the information on all the dodgy deals he has ever done. Much later, Lex leaves Krisma's building, and awakens from the spell, realizing what had happened. He needs help to defeat Krisma: Superman.

Lex heads to S.T.A.R. Labs where Superman was helping with some experiments. When he arrives, he discovers that Superman has gone to investigate a strange star, the star that Krisma comes from. Lex decides he'll have to get Krisma on his own.

Using a range of disguises, Lex sneaks into LexCorp Tower and uses his technology to send a signal. He then visits Lena, who still screams at him. Lex is soon arrested by his own security personnel and taken to the roof where Krisma is waiting.

Lex immediately uses the helicopter that is waiting on the roof to attack Krisma. However, the alien having guessed Lex's actions made all the weapons on board safe. Krisma grabs the chopper with his bare hands and destroys it, while Lex jumps clear. The fight continues, and just as Krisma is about to make the killing blow, the sky is filled with spaceships. Ships from Krisma's homeworld. They want their beloved leader back.

When Superman arrives, Lex quickly dismisses him. He has far more important things to see to: Lena, and everything is alright.

Retrieved from "https://heykidscomics.fandom.com/wiki/Superman%27s_Nemesis:_Lex_Luthor_Vol_1_4?oldid=1462210"
Community content is available under CC-BY-SA unless otherwise noted.