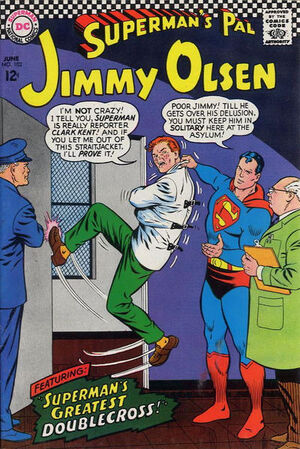 Jimmy Olsen becomes convinced that Clark Kent is trying to become Superman’s best pal in his stead. Later, when gangsters try to pry the secret of Superman’s identity out of him, Jimmy gives them the name of the one man he is sure cannot be Superman--Clark Kent.

After Jimmy Olsen's testimony sends a murderer to jail, his gang, Homicide, Inc., targets Olsen for death. Several attempts are made on Jimmy's life, and Perry White gets him a cover identity as "Jeff Ogden", a student at Stanhope College. Linda Danvers recognizes Jimmy, but agrees to help him carry off the ruse. She also covertly guards him against assassination attempts made by Mr. Quick, the syndicate's killer in disguise. Supergirl finally succeeds in capturing Mr. Quick, and Jimmy reveals his true identity to the faculty and students.

Retrieved from "https://heykidscomics.fandom.com/wiki/Superman%27s_Pal,_Jimmy_Olsen_Vol_1_102?oldid=1462418"
Community content is available under CC-BY-SA unless otherwise noted.