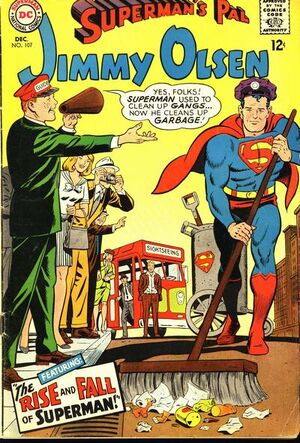 Appearing in "The Rise and Fall of Superman!"Edit

Synopsis for "The Rise and Fall of Superman!"Edit

Superman stops an alien bounty-hunter from killing a murderer of his world, and, as a result, is sentenced by the alien’s court to do menial jobs until the killer is caught.

Appearing in "The Captive of the Spidermen!"Edit

Synopsis for "The Captive of the Spidermen!"Edit

Jimmy, Lucy Lane, and a puppeteer are taken prisoner on an island by mutated spider-beings who intend to conquer the Earth after destroying Superman.

Retrieved from "https://heykidscomics.fandom.com/wiki/Superman%27s_Pal,_Jimmy_Olsen_Vol_1_107?oldid=1462424"
Community content is available under CC-BY-SA unless otherwise noted.