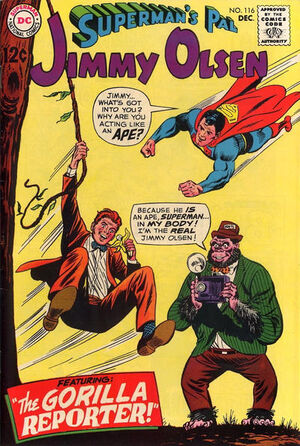 Brainiac comes to Earth and attacks Jimmy Olsen, two members of his fan-club, and Superman with a ray that enlarges objects, including Green Kryptonite.

Appearing in "The Secret of the Smallville Seeds!"Edit

Synopsis for "The Secret of the Smallville Seeds!"Edit

Jimmy Olsen and his fan club plant fast-growing flowers in Smallville that spell out the words WELCOME HOME SUPERMAN on the anniversary of his public debut as Superboy.

Retrieved from "https://heykidscomics.fandom.com/wiki/Superman%27s_Pal,_Jimmy_Olsen_Vol_1_116?oldid=1462499"
Community content is available under CC-BY-SA unless otherwise noted.