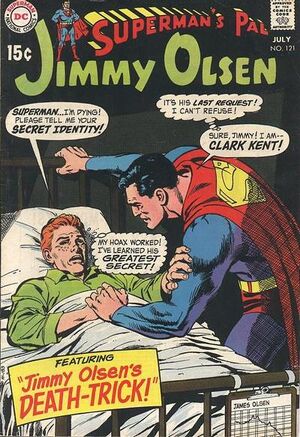 Holy cats! Those are all past lives Superman lived on Krypton! But instead of my pal, every one of them is my enemy!

Appearing in "The Three Lives of Superman!"Edit

Synopsis for "The Three Lives of Superman!"Edit

Dr. Hugo Blaine sends Superman mentally back through time to experience the lives of Kryptonians who were his genetic doubles, including an ancient warrior who was the first of the El line, a pirate, and a super-hero. Jimmy Olsen goes along as an observer.

Jimmy Olsen is stricken with a disease which could be fatal, and Superman fulfills his “dying” request, telling him that he is secretly Clark Kent. But when Jimmy Olsen makes a full recovery, he threatens to expose the Man of Steel’s secret on nationwide TV...until he assumes that a Red Kryptonite exposure was making Superman lie about everything, including the Clark Kent identity bit.

Retrieved from "https://heykidscomics.fandom.com/wiki/Superman%27s_Pal,_Jimmy_Olsen_Vol_1_121?oldid=1462509"
Community content is available under CC-BY-SA unless otherwise noted.