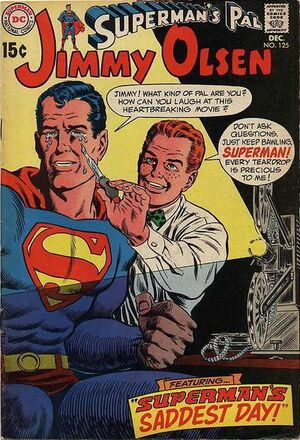 A lost prophecy of Nostradamus’s is found by Jimmy Olsen, who learns from it that if he collects “tears from king and clown, from killer, and Kryptonian of renown” and mixes them together will gain “a power unknown to man”. As it turns out, the tears mixed together (including Superman’s) create an atomic explosion.

Retrieved from "https://heykidscomics.fandom.com/wiki/Superman%27s_Pal,_Jimmy_Olsen_Vol_1_125?oldid=1462517"
Community content is available under CC-BY-SA unless otherwise noted.