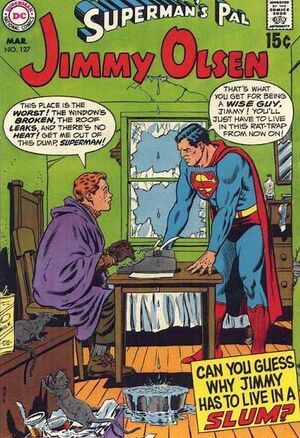 Appearing in "The Secret Slumlord of Metropolis!"Edit

Synopsis for "The Secret Slumlord of Metropolis!"Edit

Jimmy Olsen lives in a rundown tenement apartment for a time to get the goods on Mr. Squeeze, a Metropolis slumlord.

Appearing in "When Olsen Changed History!"Edit

Synopsis for "When Olsen Changed History!"Edit

Jimmy Olsen figures out that the “Revolutionary War” setting is only a sham created by Von Rick. As a payback, he gets Superman to transport himself, Jimmy, and Von Rick back in time to the real Revolutionary War, where the movie-maker admits his hoax and faces war for real.

Retrieved from "https://heykidscomics.fandom.com/wiki/Superman%27s_Pal,_Jimmy_Olsen_Vol_1_127?oldid=1462521"
Community content is available under CC-BY-SA unless otherwise noted.