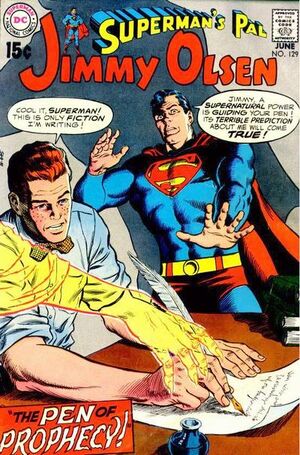 Appearing in "Superman versus Ultra-Olsen!"Edit

Synopsis for "Superman versus Ultra-Olsen!"Edit

An ancient Aztec medallion gives Jimmy Olsen super-powers, and he assumes the costumed identity of Ultra-Olsen. But two hoods kidnap his father, and blackmail Jimmy into pulling robberies for them.

Appearing in "The Pen of Prophecy!"Edit

Synopsis for "The Pen of Prophecy!"Edit

Jimmy Olsen gains a pen with magic ink, which was used by and supposedly inspired Nostradamus and Edgar Allan Poe. It writes tales, seemingly by itself, which lead to the solution of several crimes and mysteries--but it also reveals that Clark Kent is Superman.

Retrieved from "https://heykidscomics.fandom.com/wiki/Superman%27s_Pal,_Jimmy_Olsen_Vol_1_129?oldid=1462525"
Community content is available under CC-BY-SA unless otherwise noted.