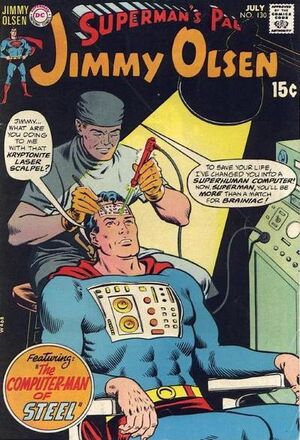 With this mini-brain, I could pay off the national debt!

Brainiac puts into action a complex plot to duplicate his intelligence in a Superman robot with the help of Jimmy Olsen and to endanger Kandor.

Appearing in "Olsen, the Teen Wonder!"Edit

Synopsis for "Olsen, the Teen Wonder!"Edit

After Robin beats out Jimmy Olsen for the Young Man of the Year award, Jimmy asks Robin to let him impersonate him again for 72 hours and see if he can catch crooks as efficiently as the Boy Wonder. But Olsen-as-Robin runs into a gang of flying crooks, and requires the help of Superman.

Retrieved from "https://heykidscomics.fandom.com/wiki/Superman%27s_Pal,_Jimmy_Olsen_Vol_1_130?oldid=1462527"
Community content is available under CC-BY-SA unless otherwise noted.