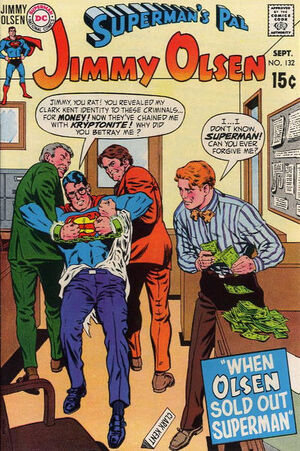 Appearing in "When Olsen Sold Out Superman!"Edit

Synopsis for "When Olsen Sold Out Superman!"Edit

Jimmy Olsen is kidnapped by gangsters who try to make him reveal Superman’s secret identity. Knowing that Perry White is not Superman, he tells them that Superman is “really” his editor at the Daily Planet--but Clark Kent has been named editor for a day, and the crooks capture him with Kryptonite.

Appearing in "The Winner's Prize ... The Loser's Grave!"Edit

Synopsis for "The Winner's Prize ... The Loser's Grave!"Edit

An island forms in the tropics and, due to its strategic importance to both the U.S. and Russia, is contended for by both superpowers. It is decided that the claim to the island will be decided by a battle between two champions from each nation...the Russian, Bors, against the American, Jimmy Olsen.

Retrieved from "https://heykidscomics.fandom.com/wiki/Superman%27s_Pal,_Jimmy_Olsen_Vol_1_132?oldid=1462531"
Community content is available under CC-BY-SA unless otherwise noted.