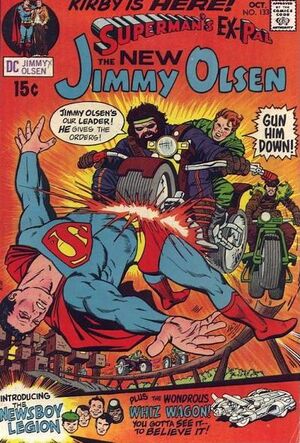 Jimmy Olsen is paired with the new Newsboy Legion, the sons of the original boy heroes plus Flippa-Dippa, a newcomer, to investigate the Wild Area, a strange community outside of Metropolis. The boys are given a super-vehicle called the Whiz Wagon for transport. When Clark Kent shows concern for Jimmy, Morgan Edge, owner of Galaxy Broadcasting and the new owner of the Daily Planet, secretly orders a criminal organization called Inter-Gang to kill him. But Kent survives the attempt, and later hooks up with Jimmy and the Newsboy Legion in the Wild Area. The youths have met the Outsiders, a tribe of young people who live in a super-scientific commune called Habitat, and have won leadership of the Outsiders’ gang of motorcyclists. Jimmy and company go off in search of a mysterious goal called the Mountain of Judgment, and warn Superman not to stop them.

Retrieved from "https://heykidscomics.fandom.com/wiki/Superman%27s_Pal,_Jimmy_Olsen_Vol_1_133?oldid=1692814"
Community content is available under CC-BY-SA unless otherwise noted.