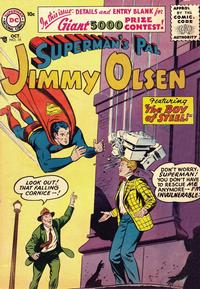 What a twist! I, Superman, writing up Jimmy's super feats!

Appearing in "The Three Lives of Jimmy Olsen"Edit

Synopsis for "The Three Lives of Jimmy Olsen"Edit

At the Daily Planet, Clark Kent is given $25,000 dollars worth of Radium from the Radium Institute so that he can determine which hospitals in the city needs it. Jimmy goes off to find his own story and runs into Swami Rama, a man who claims that he has a device that can make people remember their past lives.

Jimmy agrees to be subjected to the machine, and his first past life regression he was apparently an ancient Egyptian boy named Jhimmie, who worked for the Weekly Heiroglyphic and was best pals with Samson. When trying to find the criminal known as Pyramid Petrus, Jhimmie and Samson tracks him down to a temple which Samson destroys. The two find two chests in the wreckage, and a warning that one of them that one of them contains poisonous snakes. The past life regression ends just as Jhimmie is flipping a coin to see which one to open.

His next regression, he was apparently Jymius, and was friend with Hercules in ancient Greece, after accompanying Hercules into a cave and watching his hero fight a lion, they get lost and Jymius decides to flip a coin to see which cavern to travel into. The same theme persists in the next vision where he was Jimmy the Red, friend of Thor, and has to flip a coin to figure out which Fjord has a treasure hidden on it. Upset that his regressions end before the story he is "reliving" is complete, Jimmy asks the Swami how they can make the machine work properly. The Swami advises Jimmy that his "Reincarnation Machine" runs on Radium.

Remember the Radium at the Planet, Jimmy goes and gets it, Clark notices this and changes into Superman. Arriving at the Swami's place, Superman reveals that he's not a Swami at all but a con man named Connors who was using hypnosis to fool Jimmy in an attempt to trick the boy into handing over the Radium to him to sell.

Appearing in "The Boy of Steel"Edit

Synopsis for "The Boy of Steel"Edit

Lois Lane accidentally spills coffee on Jimmy Olsen and is surprised when the lad doesn't even notice. Trying out other tricks, she learns that Jimmy has become invulnerable, and she tells him, Jimmy attributes it to eating some berries from outer space that Superman brought back to Earth for Jimmy. When a stray ash lands in Clark Kent's garbage pail (which he is resting his foot on) he realizes too late, observing this Lois doesn't immediately think that it's because Clark is Superman (for once) and assumes that Clark had some of the berries as well.

As Jimmy goes off and exploits his new super-power to stop criminal elements, Lois consumes some of the berries herself in the hopes of getting super strength. After getting Jimmy's assistance with a number of super-feats as Superman, as Clark Kent, Superman learns that Jimmy really got his power from when he brought him near a nuclear explosion. The radiation gave Jimmy super powers, and based on the information that Superman gathers, it should wear off soon. He later uses his super-powers secretly to convince Lois that the berries gave her invulnerability as well.

When Clark's x-ray vision reveals that Lois and Jimmy are both foolishly approaching an explosives truck, Superman swoops in and rescues them. When they tell Superman that they're invulnerable, Superman proves them otherwise by stepping on their feet and they feel it. With all the berries gone, the two can only wish of ever being invulnerable again.

Appearing in "The Super Liar of Metropolis"Edit

Synopsis for "The Super Liar of Metropolis"Edit

While out looking for a story, Jimmy over hears a crook telling one of his men to setup a lie detector test as they intend to kidnap Jimmy and force him to reveal Superman's secret identity. In order to counteract this, Jimmy takes a serum given to him by Superman that will make people compulsively lie for three hours. However, Jimmy ends up lying to everyone. When Perry asks how good Jimmy's current story is, Jimmy lies and tells him it's the worst he's ever written prompting Perry to tear it up in front of Jimmy.

Later he refuses to go to a ball game with Lois Lane and tells Superman that the Midtown Bridge is collapsing when it's not (however Superman does manage to save a painter who falls off the bridge anyway.) When the crooks finally catch up with Jimmy and kidnap him, the strap him to a lie detector test. When they ask Jimmy what Superman's secret identity is, he blurts out that it's Clark Kent, ironically his lie is actually the truth, even though Jimmy doesn't believe it.

When the crooks come to gun down Clark, he secretly uses his x-ray vision to cause the wire on his electric fan to start a fire, causing smoke to obscure the crooks shots. Jimmy then quickly knocks the guns out of the goons hands, and the police are summoned to take the crooks away.

Retrieved from "https://heykidscomics.fandom.com/wiki/Superman%27s_Pal,_Jimmy_Olsen_Vol_1_16?oldid=1462243"
Community content is available under CC-BY-SA unless otherwise noted.