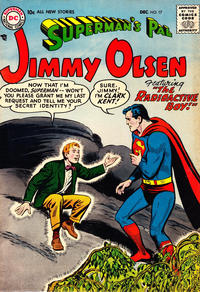 Great comets! According to our ancient legends, Jimmy Olsen was the secret identity of... Superman!

Appearing in "Jimmy Olsen in the 50th Century"Edit

Synopsis for "Jimmy Olsen in the 50th Century"Edit

Superman takes Jimmy up in a discarded rocket that Superman repaired, while taking Jimmy up into space, Superman has to smash a meteor. In doing so, he has to let go of Jimmy's rocket, and the ship traveling so fast breaches the time barrier. Jimmy parachutes from the rocket once he reaches a safe altitude and soon learns that he's traveled forward in time to the 50th Century. Visiting the Daily Planet of the future Jimmy falls down an elevator shaft and is almost injured but is saved by a robotic bird. When people notice him and comment on his strange attire, he explains who he is. To his surprise, the people of the 50th Century believe that Jimmy Olsen was the legendary Superman.

He soon shown newspaper headlines that were saved from the 20th Century that talk about Jimmy Olsen pulling of super-feats, realizing that these were all reports from events where Superman did tricks to make Jimmy appear to have super powers. He is unable to convince people because there are no existing photographs of Superman that have endured the ages. Given Superman's cape, Jimmy hears of an ocean liner that is in peril, Jimmy tries to explain that he has no super-powers. However, this is when a professor Xerxes steps in. Explaining that there is a Kryptonite meteor passing the Earth, he gives Jimmy devices that mimic all of Superman's super-powers and send him off to rescue the ocean liner.

Jimmy soon learns that a man named Jon Smyth has published a book claiming that Superman is a hoax, and exposes that Jimmy was using special devices to save the day. Jimmy decides it's time to call in the real Superman, who is able to hear his signal watch back in the 20th Century. Superman arrives in the 50th Century and proves to the people of the future that Superman truly exists. Superman also unmasks Jon Smyth as Professor Xerxes, who hope to exploit Jimmy to sell more copies of his book. With Jimmy's goal accomplished the two return back to the 20th Century. However, upon returning to the present, all Jimmy's memories of the future are wiped from his mind, a side effect for humans who travel through the time barrier.

Appearing in "The Case of the Cartoon Scoops"Edit

Synopsis for "The Case of the Cartoon Scoops"Edit

Jimmy gets an anonymous letter from a Daily Planet reader who has heard that Jimmy went to art school and suggests to Jimmy that he should draw cartoons of Superman's unusual super-feats. Jimmy decides to go with this idea and it soon becomes an instant success. At first Jimmy begins drawing cartoons about Superman's past exploits, however he starts getting phone calls from a mysterious Swami who claims to see the future. Jimmy then begins to draw cartoons based on the Swami's predictions, and to everyone's surprise (even Superman) these predictions all come true.

As it turns out, it's really Superman who has been hoaxing Jimmy into making these drawings, the final prediction of the "Swami" is that Superman will come and smash Jimmy's Superman souvenir collection, a prediction that Jimmy dreads if it comes true. Sure enough, Superman shows up that night to smash Jimmy's collection, how the Man of Steel doesn't really do it. Superman then reveals that he was really the Swami and that he hoaxed Jimmy the whole time.

He then takes Jimmy to the local jail where he introduces him to "Sly" Sanders, a crook who wrote Jimmy the anonymous letter. Sanders is to be released from prison soon, and his plan was to get Jimmy to hopefully give some useful information that crooks could use against Superman. Superman then shows Jimmy the cartoon he drew and was going to publish just before he started getting calls from the "Swami": A drawing that depicts Superman using his super-hearing to eaves drop on crooks that pointed out that the only way to foil the Man of Steel's super-hearing was with loud noises.

This teaches Jimmy a valuable lesson in always checking his sources, a lesson Jimmy exercises a little too diligently when someone calls to warn that his waste paper basket is on fire.

Appearing in "The Radioactive Boy"Edit

Synopsis for "The Radioactive Boy"Edit

Having amassed damaging evidence against Barney Bolton and his gang that would put the crooks behind bars, Jimmy puts the information in a safe at the Daily Planet. Perry White then sends Jimmy to the Metropolis Atomic Plant to cover it's opening for the Planet. When he's accidentally bumped into the atomic pile, Jimmy wonders if he's been contaminated with radiation.

Surprisingly, Jimmy soon begins to glow, leaving radioactive foot prints and killing plants in his wake. Jimmy soon believes that he's gotten radiation poisoning and is a menace. Not wanting to harm anyone before he dies, Jimmy flies the Flying Newsroom to a remote cave where he will live out his last moments. He is visited by Superman, who asks Jimmy for the safe combination so that he can get the evidence. Superman then grants Jimmy a dieing wish, and Jimmy asks Superman to reveal his secret identity to him. Superman tells him he's Clark Kent before leaving.

However, as "Superman" leaves the cave, it turns out that he's really Barney Bolton in disguise and he had hoaxed Jimmy into believing that he's dieing of radiation poisoning so that he could get at the evidence against him at the Daily Planet. However, when Bolton (still disguised as Superman) is about to open the safe, the REAL Superman appears with Jimmy and the unmask Bolton. Jimmy explains that he realized that the Superman that he spoke to in the cave was a fake because he didn't believe that Clark Kent was Superman, an idea that Jimmy thought was ludicrous and so he called the real Superman with his signal watch.

Retrieved from "https://heykidscomics.fandom.com/wiki/Superman%27s_Pal,_Jimmy_Olsen_Vol_1_17?oldid=1462245"
Community content is available under CC-BY-SA unless otherwise noted.