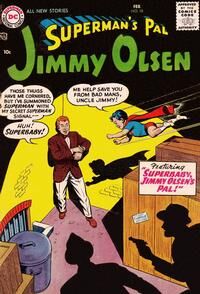 Appearing in "The Super Safari"Edit

Synopsis for "The Super Safari"Edit

When Jimmy is chased by a rabid dog, he is saved by Sahib Sik, who gives Jimmy a flute that supposedly controls animals. However, Jimmy doesn't realize that Sahib Sik is really a fraudster and is using trickery to prove to Jimmy that the flute works, he then sells it to Jimmy for 25 cents. Going to the Metropolis Circus with Clark Kent, Jimmy uses his flute to apparently stop a escaped tiger without Superman's help.

The circus owner, offers Jimmy a job collecting various animals that he needs for his show, giving him a list of how much he'd pay for each animal, because his original animals all escaped. Realizing that it wasn't Jimmy's flute that stopped the tiger, Superman is unable to convince Jimmy what really happened. With the boy convinced that his flue works, Superman can only accompany the cub reporter to Africa to catch the animals to make sure Jimmy doesn't get hurt.

To Superman's surprise, all the animals apparently seem to fall under Jimmy's control when he plays the flute and Superman helps round them all up. Suddenly, Superman realizes the truth, and to convince Jimmy that his flute doesn't work he disguises himself as a gorilla and attacks Jimmy, who abandons the instrument when it proves to not work against the faux-ape.

Superman then reveals to Jimmy that the reason why the animals listened to him is because, by sheer coincidence, they were the animals that escaped the circus to begin with. They return the animals to the circus and although Jimmy isn't paid for his services, the owner can re-open his circus. Later, Superman exposese "Sahib Sik" for the fraud that he is and turns him over to the police.

Appearing in "The Riddle Reporter"Edit

Synopsis for "The Riddle Reporter"Edit

When Superman saves another planet from a comet, he is given gifts of gratitude which Superman turns over to Jimmy for his Superman souvenir collection. It turns out to be a robot and some robot candy, Jimmy tries the candy out and goes to bed for the night.

The next day when he goes to visit Professor Clyde to get a story on a new type of plastic, Jimmy realizes to his surprise another reporter beat him to the punch. Returning to the Daily Planet, Jimmy is shocked to find a masked reporter getting a job at the Daily Planet. Sure enough, this mystery reporter ends up beating Jimmy to the punch of a lot of scoops that under normal circumstances the cub reporter would beat out the competition.

Superman explains that when Jimmy went to sleep the first night he got the robot, he talked in his sleep and the robot was just following his instructions. Shortly after the robots power unit frizzled out and the robot becomes inoperable, and Jimmy places it back in his souvenir collection.

After amassing evidence to put the criminal "Silk" Standish behind bars, Superman feels that the remaining members of his gang might want to get revenge on Jimmy and so decides to act as the cub reporters bodyguard. Taking Jimmy to visit Professor Boon, Superman leaves to patrol for the rest of the Standish gang. Boon reveals to Jimmy his latest invention a "Time Reverser" that can change an object in it's beam to a past incarnation of itself, he demonstrates it on various items and through the process Jimmy's signal watch is accidentally hit by the beam and is changed into an old time piece from the 1930's.

Calling Superman to pick him up, Jimmy is shocked to find that Superbaby answers his summons instead of Superman. Not only does Jimmy now have to keep the young Superbaby out of trouble, but the Standish gang picks this moment to try and assassinate Jimmy. With the aid of Superbaby, Jimmy manages to stop the crooks and turn them over to the police.

Later, Jimmy tries to repair his watch so that he can send Superbaby back to the past and bring Superman back to the present. Jimmy partially succeeds, and instead of Superbaby being in his apartment, it's Superboy. Superboy manages to help Jimmy fix his watch so that Superman can be brought back to his own time. When Superman returns, Jimmy explains to him everything that happened.

Retrieved from "https://heykidscomics.fandom.com/wiki/Superman%27s_Pal,_Jimmy_Olsen_Vol_1_18?oldid=1462247"
Community content is available under CC-BY-SA unless otherwise noted.