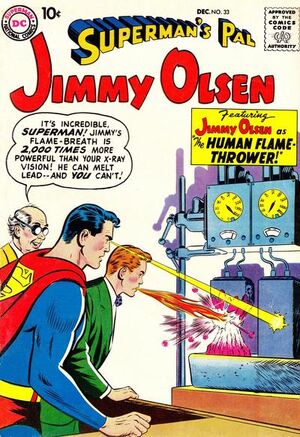 Appearing in "The Legends That Came to Life!"Edit

Synopsis for "The Legends That Came to Life!"Edit

In a nuclear dumping ground a discarded prism is struck by lightning, and linking it to the broadcasting tower where the radio quiz show Golden Questions is airing. By twist of fate, Jimmy Olsen is a contestant on that show and is competing to win the $100,000 prize. Being asked questions about about different mythical creatures, Jimmy answers all the questions correctly, however upon answering each question causes the prism in the dump to bring each character to life.

First, Jack Frost is brought to life and causes trouble around Metropolis with his power to freeze things, but Superman chases him into hiding with a chunk of the sun. The next right answer brings the giant from Jack and the Beanstalk to life, who terrorizes the city looking for food, Superman puts him to sleep by giving him a large cake to eat. Finally, the last answer is the Pied Piper, who comes to life as well and tries to drown the cities police officers until he is stopped by Superman.

The trio of imaginary characters end up meeting up together and with the Pied Piper learning all he can about Superman, they devise a plan to stop the Man of Steel. Putting Jimmy in their thrall, they weaken Superman with a Kryptonite meteor the giant digs up. Jimmy, wishing to save his pal, goes back to the studio and and answers the next question incorrectly, sacrificing the prize money to save Superman's life. Instead of the right answer, he says Superman, which cases the prism to create a duplicate of Superman who saves the original Man of Steel. Taking the real Superman to the prism's location, Superman destroys it causing all it's constructs, including his duplicate, disappear.

Appearing in "The Lady-Killer from Metropolis!"Edit

Synopsis for "The Lady-Killer from Metropolis!"Edit

While in Hollywood filming a new Superman film, the Man of Steel finds his pal Jimmy Olsen in the area covering the story for the Daily Planet. Jimmy is upset because he figures his small stature is what prevents the women from swooning over him. Deciding to increase his stature, Jimmy puts on leg extenders to make himself look taller than he really is.

To Jimmy's shock, Hollywood starlets and visiting royalty alike begin to swoon over him, but Jimmy is at a loss as to why. When his refusals of marriage to any of them prompts two men related to two of the jilted romancers come to beat Jimmy up, he learns that they think that he is Superman and that's why he has become desirable to women.

Deciding to use this to his advantage on a planned date, Jimmy arrives to find out that the girl he was supposed to take out has canceled their date, not liking tall men, and is choosing to go out with a man shorter than even Jimmy himself is.

Appearing in "The Human Flame Thrower"Edit

Synopsis for "The Human Flame Thrower"Edit

Jimmy is visiting Professor Potter who has created a breed of firefly that generate heat in the hopes of using it to heat peoples homes. Jimmy lifts up the jar and burns his hands causing him to drop the jar. When it explodes upon hitting the ground the gases inside envelope Jimmy. Dismissing the accident and figuring there is no ill effect, Jimmy is shocked to find that he has gained the power to breath fire when he belches out flames to light one of Perry's cigars.

Jimmy hopes this new super-power can be used to his benefit, however he finds that sometimes it is hard to control. While it works at times of need, like using it to help out a cook who's electric grill has shorted, and making a dragon in a Chinese parade breath fire, Jimmy also finds that it works against him like when he accidentally incinerates a story that he's typing and when he gets accidentally burns money Superman collected for charity.

Needing to come up with quick cash to replace the money he accidentally destroyed, Jimmy joins the circus and tries to wow the audience with his fire breathing powers. However, the tremendous heat generated by these flames forces people out of the tent and he's fired without seeing a single penny. When news of Jimmy's fire breath hits the news, a group of criminals hope to exploit Jimmy's new powers and kidnap him by wearing asbestos suits to prevent them from harm. In trying to prevent his kidnapping, Jimmy accidentally burns his signal watch rendering it useless.

After being forced to help the crooks rob a bank vault, using his powers to melt through the steel door. They later trap Jimmy in a wood house lined with TNT to prevent him from using his fire-powers to burn his way out of his trap so that they can get away. Jimmy however uses his flame powers to create smoke signals from the chimney to call Superman for help, who rounds up the crooks.

Jimmy is given $1,000 in reward money which he turns over to Superman to replace the money he burned. When his flame powers flare up again, he's sprayed in the mouth by some fire men, and it turns out that water was apparently the cure to his flame breath.

Retrieved from "https://heykidscomics.fandom.com/wiki/Superman%27s_Pal,_Jimmy_Olsen_Vol_1_33?oldid=1519344"
Community content is available under CC-BY-SA unless otherwise noted.