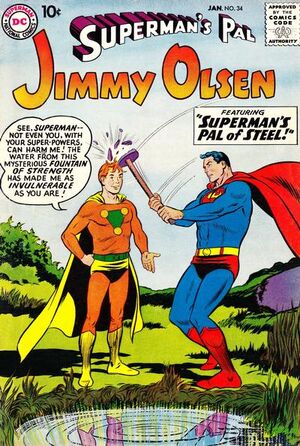 Appearing in "Superman's Pal of Steel"Edit

Synopsis for "Superman's Pal of Steel"Edit

When reports that the river Styx may actually run deep underneath Metropolis, Perry White sends Clark Kent and Jimmy Olsen to investigate. When Clark accidentally falls in, and a stalactite falls on his head without any harm, Jimmy is convinced that the water really is from the river Styx and that it can grant those with invulnerability, and jumps in himself. Since Clark Kent is really Superman, he was already invulnerable, and because the water probably has no real effect on people, Clark has to secretly use his super-powers to convince Jimmy that he's invulnerable in order to preserve his secret identity. He later caves in the cavern as Superman to prevent anyone else from venturing below.

Jimmy decides to put on garish costumes and parade around and put his "invulnerability" to the test. Hoping that Jimmy will not be harmed, Superman secretly insures that no harm comes to Jimmy. When Jimmy takes on a bolt of lightning (really Superman threw a metal arrow past the bolt at super-speed faster than anyone can see), Jimmy's first costume gets wet and the colors run.

With no budget left for a new costume, Jimmy stands before a rocket that is being prepared for launch. When the atomic fuel begins to violently explode, Jimmy refuses to flee the scene. Watching the situation from a television at the Daily Planet as Clark Kent, Superman decides not to act. This is because he recalled that when they were in the cave earlier, a bat was seemingly immune to his torch. Realizing that he river truly gave people invulnerability, he decided to leave Jimmy to brave the explosion. Not surprisingly, Jimmy survives the ordeal and returns to the Daily Planet.

There he is pained by a tack in his shoe, and realizes that the effects were only temporary.

Appearing in "The Underworld Journal"Edit

Synopsis for "The Underworld Journal"Edit

After being reamed out by Perry White due to his poor writing skills, Jimmy is annoyed at being treated as a Cub reporter, figuring that he's writing is as good as anybody else. He then gets a call from the Clarion newspaper, who tells Jimmy that they want him to be their new owner and editor. Jimmy then egotistically gets himself fired from the Daily Planet by being rude to Perry White before telling Perry that he's going to work for the Clarion, and vows he will put the Daily Planet out of business.

To everyone's shock, Jimmy begins reporting stories and writing editorials that reflect Superman in a negative light, and appearing to be in glorifying the criminals which Superman brings to justice. When Lois Lane goes to visit Jimmy and see what the problem is, she finds that Jimmy is only reporting in such a way to boost his circulation and doesn't seem to care about any sort of journalistic objectivity. Eventually, the Clarion gets the reputation of being an "underworld" newspaper, and Jimmy "befriends" some former criminals who convince them that they have reformed.

When covering a story of a character named the "Ghost" who is a master safe cracker and escape artists, the criminals kidnap Jimmy, the Ghost, and Lois Lane and force the Ghost to crack a safe full of loot they intend on stealing. The Ghost complies, however he reveals himself to really be Superman in disguise, who easily rounds up the crooks.

Later, it's revealed that Jimmy was perpetuating a hoax with the help of Superman and Perry to capture the crooks, and soon turns over control of the Clarion to it's rightful heirs and takes his old job back at the Planet.

Appearing in "The Most Amazing Camera in the World"Edit

Synopsis for "The Most Amazing Camera in the World"Edit

While taking photographs of scientific inventions Jimmy meets up with Professor Potter again, who has a top secret camera he's testing out. When Potter uses the camera it explodes in his hands and unknowingly effects Jimmy's camera and makes it suck up items that he is taking pictures of. Unknown to this, Jimmy takes a picture of Perry in commemoration of his 25 years of service with the Daily Planet, this causes his dentures to be sucked out of his mouth and into the camera. Later, Jimmy sucks in a bullet that was fired at Superman while taking pictures during a fight, and later still unknowingly sucks up Superman's specially made glasses into the camera while taking a picture of the Man of Steel at a marble competition.

Later, his camera sucks up a diamond that he is photographing and a criminal happens to see the spectacle and decides to try and steal it for his own gain. Later, when Jimmy returns home and tries to take the film out of his camera, he's shocked to find the items inside. Finding Superman's glasses and learning that they are indestructible and that they resemble Clark Kent's own glasses, Jimmy decides that he will try and get Clark's finger print to see if they match the ones that are on the glasses.

When the crook takes Jimmy hostage and steals the camera and uses Jimmy's signal watch to lure Superman into a trap by a false promise of a Kryptonite antidote, the crook tries to kill Superman with Kryptonite. However, Jimmy saves the day, and the camera is destroyed in the process. Later, when Jimmy has Clark Kent give his finger print so that he can match it with the one on the glasses, Jimmy is shocked to find that it doesn't match, totally unaware that Jimmy was comparing Clark's finger print to his own (which he accidentally put on the glasses himself.)

Retrieved from "https://heykidscomics.fandom.com/wiki/Superman%27s_Pal,_Jimmy_Olsen_Vol_1_34?oldid=1519351"
Community content is available under CC-BY-SA unless otherwise noted.