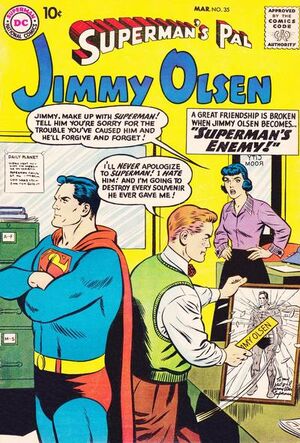 Appearing in "The Menace of Superman's Fan Mail!"Edit

Synopsis for "The Menace of Superman's Fan Mail!"Edit

Jimmy Olsen has come up with a new publicity scheme for the Daily Planet: Offering new subscribers the chance to write in a question about Superman, which Jimmy will answer personally. Jimmy asks Clark Kent to help him out, completely unaware that his co-worker is really Superman in disguise. The feature becomes so popular that the mail box at the Daily Planet is overflowing with questions for Superman. So much so that Superman himself is asked to come in an answer all the questions he can, which he does in a matter of moments.

A criminal, back in the country after being forced to flee to Europe due to the pressures caused by Superman's manhunt for him has come up with the ultimate revenge: three letters that will spell doom for the Man of Steel. Superman would answer the first letter mailed by the crook, completely unaware that the licking surface on the self-addressed reply envelopes have been laced with Kryptonite dust. As Superman goes about super-feats between answering letters he notices that his powers have begun to weaken.

As press reports indicate that Superman is somehow losing his powers, the criminal responsible becomes gleeful of his brilliant plan to eliminate Superman. While monitoring the Daily Planet building, the crook rushes in when Jimmy is about to answer the third, and lethal letter. Stopping Jimmy at gun point, he forces the two of them to hide out and wait for Superman to lick the final envelope. Superman does and seemingly dies, however when the crook has his guard down, Superman suddenly revives and takes away his gone.

Superman reveals that he never licked a single contaminated envelope after the first one when he recognized the crooks handwriting and matched it to that of criminal "Labs" Logan in the polices crime file. He also points out that Logan's plot failed anyway as he was not aware of the price increase on postage since he was out of the country and all his lethal letters ended up in the dead letter department of the post office. With Logan's plot failed, Superman takes him off to jail.

Appearing in "The Robot Jimmy Olsen"Edit

Synopsis for "The Robot Jimmy Olsen"Edit

For Jimmy Olsen's eventual 21st birthday, Superman has constructed his best pal a robot suit that can imitate all of Superman's powers. The duo fly to the Daily Planet where Jimmy shows off his robot suit to Lois Lane and Perry White. When Superman tells Jimmy that he should put his costume away, Jimmy finds that the helmet is stuck on him. Before Superman can remove it, he is called to prevent the Metropolis dam from breaking. While Superman is busy, Jimmy picks up a distress call on his robot suit.

Upon going to investigate, he finds that the person who is calling for help is only looking for someone to catch his dog, whom someone had tied cans to its tail. When Jimmy returns to the office Lois and Perry have a congratulatory reef for him, and he has to embarrassingly tell them what happened. Jimmy has a series of super-boners, the next one is when he thinks he's saving a woman falling from a building, but it turns out to be nothing more than a dummy being used to test a new device. His next attempt to stop two trains from colliding results in him realizing the magnification on his x-ray vision was too high and that he only prevented two toy trains from crashing into each other.

When Superman returns from his task, he tells Jimmy that his seeming super-boners were in reality important deeds after all. As it turns out, the dog he rescued was a famous dog actor from Hollywood, who would have been electrocuted had the cans tied to his tail touched the third rail of the train tracks he was near. The dummy he stopped from falling was rigged with explosives by a crook and his "rescuing it" allowed the police to discover it and defuse it. Lastly the toy trains that he prevented from crashing were new prototype toys that operate on an atomic powered engine and any damage would have set back their developments.

With the day over, Superman finally helps Jimmy get out of his robot suit and Superman takes it away, promising to gift it to Jimmy when he officially turns 21. Jimmy tries to figure out how many years/months/days/hours to his 21st birthday.

Back from a mission in space, Superman gives Jimmy Olsen another item for his souvenir collection: a strange space diamond. After Superman leaves, the diamond radiates a beam that makes Jimmy Olsen hate Superman. Jimmy first starts making fun of Superman in his write ups for the Daily Planet, then calls Superman the "Man of Tin" and puts a sign over Superman's neck. Superman dismisses this behavior as he notices that today is April Fool's Day.

Undaunted, Jimmy takes all the gold souvenirs from his collection, including Superman's Man of Steel trophy and tricks Superman into using his x-ray vision to melt it. Once he explains to Superman what he tricked the Man of Steel into doing, Jimmy pours salt on the wound by pawning off the melted gold. Next Jimmy wards off Superman by threatening him with Kryptonite, much to the shock of everyone at the Daily Planet.

Perry, in an attempt to get Jimmy to make up to Superman has him put the final touches on a picture spread that promotes Superman's abilities and popularity. Jimmy alters the drawing completely changing it into a mockery of the Man of Steel. This is the last straw for Superman, who asks for Jimmy to give back his signal watch. During the whole ordeal, Jimmy takes every opportunity to mock the Man of Steel. After leaving the Daily Planet, Jimmy snaps out of the jewels influence and realizes what's happened when he sees a newspaper. Ashamed, Jimmy leaves town, not wanting to be seen by anyone.

Convinced that something must have influenced Jimmy into behaving as he has, Superman and Perry White go to Jimmy's apartment to search for clues. There, Superman notices as the jewel effects Perry White in much the same way it effected Jimmy. Using the jewel again after bringing Perry back to the Daily Planet makes the stern editor generous and complimentary to his staff and offers them all bonuses. While Superman goes to pick up Jimmy and explain what happened, Lois Lane gets hold of the jewel and plans to use it on Clark Kent to see if it effects him -- yet another attempt to try and prove that he and Superman are one in the same.

However, Lois is unaware that Superman's super-hearing picked up on her talking about this plan and when Lois uses the jewel on Clark he pretends to become aggressive and demands a raise from Perry, once more deflecting Lois' suspicion of him. Later, as Superman again, the Man of Steel destroys the crystal and Jimmy and Superman deliver a new edition of the Daily Planet announcing that their feud is now over.

Retrieved from "https://heykidscomics.fandom.com/wiki/Superman%27s_Pal,_Jimmy_Olsen_Vol_1_35?oldid=1519342"
Community content is available under CC-BY-SA unless otherwise noted.