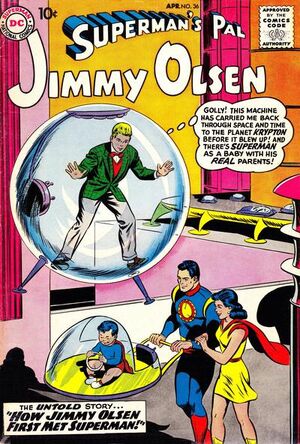 When Perry White gets reports of a flying man in the South American city of Peccador, he sends down Jimmy Olsen to investigate the story. Arriving in the town, Jimmy finds that it is under the dictatorship of a tyrant named Bullboa. The people of Peccador live in fear of this dictator and his police force and are forced to turn over their possessions over to the tyrant. Deciding to call in Superman, Jimmy find that the mountain range nearby prevents his signal watch from transmitting out of Peccador.

Jimmy's attention is turned toward a young man who warns the police that if they do not stop robbing a man Super-Senior will defeat them. Suddenly, it appears as though Superman has appeared to stop the crooked police officers. The bullet proof Super Senior makes the cops drop their guns with a super shout. Jimmy notices that all the noise is really coming from up from the building not from "Super-Senior's" mouth. Going to the roof of the building Jimmy learns that it's all an elaborate hoax being controlled by a boy named Poncho who is trying to overthrow Bullboa as dictator. Jimmy decides to lend a helping hand by helping Poncho using his various devices to fake Superman's super human abilities. Melting the officers weapons with a giant lens and sending them packing with a gigantic fan.

Later, Jimmy learns that Super-Senior is really Pancho's father, Paco. He agrees to help the two hide the devices they had smuggled into the country to pull off their Super-Senior ruse. Later while having a meal with Paco and Pancho, they are visited by the police who are doing house searches to find Super-Senior. When they spot the cape that Paco has been using, Jimmy quickly covers by saying it's a bull fighting cape. Later when Jimmy helps them operate another Super-Hombre appearance, the cable that makes it appear as though Super-Hombre flies breaks, revealing the hoax. Jimmy and Paco are arrested and scheduled to be arrested.

With his signal watch still not working, Jimmy gets an idea on how to get around this handicap and call Superman for help: Attracting a nearby bird, Jimmy ties his signal watch to it and sets it free. When it flies beyond the mountains the signal gets to Superman who quickly tracks down Jimmy. Switching places with Paco, Superman poses as Super-Hombre and gladly stands for his execution by firing squad. When they prove unable to shoot Superman to death, Superman demands that Bullboa concede and let his city become a republic. At first Bullboa refuses, however Superman "convinces" him to change his mind. Bullboa promises to leave but wants to take all the gold with him. Superman agrees that Bullboa can go as long as he can carry the gold out himself. Superman however has used his x-ray vision to melt all the gold bars into one gigantic gold block that Bullboa and his men cannot carry out.

With Bullboa's time being up, Superman tosses Bullboa and his men into his boat and sends them off to sea. With the tyranny of Bullboa ended, Supermand and Jimmy return to the States where Jimmy writes his report about Peccador's liberation.

Going to the Metropolis airport to meet up with Lois and Clark who are returning from a trip abroad, Jimmy meets Lois Lane's sister Lucy, who is a flight attendant for the airline Lois and Clark where flying on. Jimmy is instantly smitten by Lucy Lane. Taking Lucy to meet up with Lois and Clark, Jimmy tries to impress her by taking her to the Superman museum and talking about all the times Superman has flown her around. Lucy however is not the least bit impressed, and Jimmy takes her to the Daily Planet. There Lois suggests that the four of them go to dinner together.

At a Superman themed restaurant, Jimmy orders everyone a round of steaks, the most expensive item on the menu. This tips Clark off to the fact that Jimmy is falling for Lucy. After dinner, Jimmy asks Lucy on another date, and she tells him that she is busy until Saturday. When the couples part company, Clark goes along with Jimmy and lets the boy talk about his infatuation with the younger Lane sister. With his super-hearing overhears how Lucy is going to be on a flight with a famous rodeo star, whom she finds more interesting that Jimmy and hopes to set-up a date with so that she can cancel on Jimmy.

When Clark tips off Jimmy of this possibility, Jimmy decides to show Lucy that he too can as exciting as a rodeo star. Putting on a cowboy costume, Jimmy poses as "Tex Bolton" a Texas oil-man. There he attempts to upstage "Twirler" Thompson from wooing Lucy Lane. When "Tex" manages to captivate her attention, "Twirler" attempts to throw Jimmy off his game by tossing a dummy of himself out of the plane. When Jimmy attempts to lasso the supposed falling body, he gets secret help from Superman to pull up the body in a lasso, and Thompson's hoax is revealed and Lucy refuses to date Thompson.

When checking the flight back to Metropolis, Jimmy is worried that one of the inventors coming back from an Inventors Convention might attempt to woo her. Deciding to prevent this from happening, Jimmy purchases a robot costume to hatch his next scheme. When Lucy is initially showing interest in "Genius" Jones who is showing off his Thot-O-Printer, a device that prints photographs of your thoughts, Jimmy appears pretending to be a robot. However, when Jones calls Jimmy on the fact that he's really a person in a robot costume, Superman secretly steps in and tries to help Jimmy out. This doesn't fool "Genius" Jones in the slightest who unmasks Jimmy.

With the truth out, Jimmy admits to pulling this and the "Tex Bolten" impersonation as well as an attempt to get Lucy to keep her date with him. Touched that Jimmy would go through so much trouble over her, she promises to keep their date. THat Saturday when their date ends, Jimmy proposes to Lucy. Lucy tells Jimmy that she would marry him only when her vow she made to her mother is upheld, that Lois gets married before she does. She then tells Jimmy that if he can convince Superman to marry Lois, she will gladly marry him.

Years ago Jimmy Olsen had traveled to Metropolis to start a new life, excited to live in the same town as his idol, Superman. While job hunting Jimmy visits Professor Crane, a scientist looking for a lab assistant. Taking the job, Jimmy is asked to test out his time machine. Figuring that it will be a failure, Jimmy agrees to test it out. The Professor warns Jimmy that since the universe is constantly moving the time machine may materialize him on another world.

The time machine surprisingly works and Jimmy finds himself transported back in time to the planet Krypton some 20 years in the past. Causing some traffic troubles, Jimmy is chased by the police but he manages to lose them by hiding out at an exhibit of Earth culture. After securing some Kryptonian clothing and an anti-gravity belt, Jimmy goes exploring around the home world of Superman. To his surprise, he finds the lab of Jor-El and overhears his wife Lara complaining about how their work is hampered due to their obligation to keep young Kal-El out of trouble. Jimmy appears and offers to baby sit young Kal-El while Jor-El and Lara work on their rocket project.

As Jor-El tests his prototype rocket with the family pet Krypto, Jimmy takes young Kal-El to the Kryptonian aquarium, later when they go for food, young Kal-El pushes all the buttons on the food dispenser causing all sorts of food to fly out, prompting Jimmy to spank young Kal-El.

Taking Kal-El back to Jor-El, they prepare to put the child in his rocket to send him away from Krypton before the planet explodes. However as Jor-El is preparing the rocket Kal-El crawls away. Jimmy and Krypto go out looking for the boy and have to prevent the Kryptonian police from arresting Jor-El for his "false" doomsday predictions. Jimmy turns Kal-El over to Jor-El, who launches the boy off in the fated rocket that will send him to Earth.

Jimmy manages to escape to his time ship and return to the present just as Krypton is exploding. Back in his own time, Jimmy has no memory of what had happened and Professor Crane considers his invention a failure. Unemployed again, Jimmy begins looking for work, when he is confronted by Superman who offers Jimmy his friendship and a job at the Daily Planet in thanks for looking after him as a child.

And so this is how Jimmy Olsen and Superman became best pals, how Jimmy was rewarded with a signal watch and began collecting Superman souvenirs. As Superman departs later, he jests about how spanking him as a child was a "fine way" to treat a pal.

Retrieved from "https://heykidscomics.fandom.com/wiki/Superman%27s_Pal,_Jimmy_Olsen_Vol_1_36?oldid=1462283"
Community content is available under CC-BY-SA unless otherwise noted.