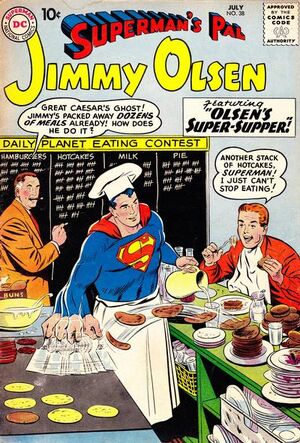 Appearing in "The MC of the Midnight Scare Theater!"Edit

Synopsis for "The MC of the Midnight Scare Theater!"Edit

While on a date with Lucy Lane, Jimmy sits down to watch one of his favorite TV shows: Midnight Scare Theater which is hosted by the ghoulish Phanto. Lucy is at first put aback by the ghoulish looking TV personality, but soon comes to enjoy his wacky antics much like his viewing audience.

Later that night Jimmy pays a visit to the TV studio to interview Phanto for the Daily Planet, before the interview can begin one of the stage lamps topples over and hits Phanto on the head knocking him out. With the next taping coming up, Jimmy offers to take Phanto's place. That night Jimmy puts on a stellar performance and the audience finds him just as entertaining. The producers of the show are so impressed they offer Jimmy to return under the name Nelso until Phanto recovers from his injuries.

However, with each nights appearance on television, something in Jimmy's performances makes a television viewer drop dead of fright each night the program airs. Each time there is a death after one of his shows Jimmy is mortified however the producers and his pal Clark Kent reassure him that it's just a crazy coincidence. On his last night Jimmy is asked to wear a skeleton costume, which Jimmy is sure will kill someone and quits on the spot. Walking out of the studio, he runs into a crowd of people and sure enough one of their number drops dead of fright.

Walking home later, Jimmy is stopped by Superman who tells him that he's needed in Washington D.C. There he is taken to the White House where he meets the President of the United States and the four people who seemingly died of fright watching his program. The President explains that Jimmy has done a great service to his country: That they used the "fright" story as a cover so that these chosen spies would be assumed to be dead and more easily able to infiltrate enemy countries.

jimmy Olsen rushes out of the Daily Planet in order to keep his date with Lucy Lane, however he is struck with a sudden toothache. When he calls to cancel the date, he is upset to learn that Lucy had completely forgot that they had a date that night. On his way to the dentist he takes note of other women being interested in him and wonders why Lucy won't give him the time of day.

When put to sleep at the dentists office, Jimmy has a vivid dream wherein Lucy Lane admits that she loves Jimmy but is jealous of Superman. When Jimmy proposes to her she accepts but asks Jimmy to never see Superman again. Later at their wedding, Lucy forces Jimmy to agree to never see Superman as part of their marital vows. When the wedding is spoiled by rain, Superman builds a gigantic umbrella using his cape to shield everyone. When Jimmy marvels at how wonderful Superman is, Lucy reminds him of his vow never to see Superman again.

Jimmy is allowed to keep his Superman souvenir collection however he is forced to give up his job at the Daily Planet and take up a career as a milk man where he must avoid calling Superman on his signal watch whenever he sees trouble. Years later, Jimmy is a father to Jimmy Superman Olsen Jr., however when Lucy proves unable to stop the baby from crying Superman's surprise visit calms the baby. Lucy warns Jimmy that if Superman comes over again that they are through.

As the dream flashes ahead in years, young Jimmy Jr. becomes interested in his fathers past with Superman and is surprised when Superman pays the family a visit although Lucy is less than impressed. When news reports of a Phagasauraus reawakening in the ocean hits the news, Jimmy has the only plant that can knock the creature out, however Lucy forbids Jimmy from contacting Superman. Jimmy decides to take a walk and when he comes home he finds his wife packing up their things and taking Jimmy Jr. When Jimmy asks what's happened she accuses him of contact Superman behind her back and leaves.

Lucy's car swerves off the road and to her surprise she is rescued by Superman, she and Jimmy learn that it was Jimmy Jr who had gave the plant to Superman having taken his fathers old signal watch out of the family safe. Realizing her mistake, Lucy kisses Jimmy and apologizes.

Jimmy snaps out of his dream to find that he has really been trying to kiss the dental assistant the whole time. Later when Lucy calls Jimmy to ask him if he'd see her, he recalls the dream and tells her off for getting in the way of his friendship with Superman before hanging up on the confused girl.

Jimmy Olsen goes out on a date with Lucy Lane, unaware that they are being spied on by two men. Lucy is embarrassed by the jalopy that Jimmy is driving but agrees to go on their date so long as Jimmy promises not to take her out in the car again. Pulling into a diner, Jimmy points out a sign advertising an eating contest that is being run by the Daily Planet, to which the winner gets a brand new car. As Jimmy goes inside to get their food order, one of the men following Jimmy lets the air out of one of his ties. When Jimmy points it out, an annoyed Lucy breaks off their date and leaves with another group of teenagers.

Jimmy is then confronted by the two men who have been following him: Dr. Falke and his assistant Mike. Falke explains to Jimmy that he has invented a new super-metabolism pill that he wishes Jimmy to try out for him. Jimmy agrees figuring that this will give him an edge in the upcoming eating contest. Testing out the pills, Jimmy finds that they truly work and eats a gigantic amount of food before calling it a night.

The next day while at the eating contest (with food being prepared by Superman) Jimmy totally cleans up and wins the contest. Driving home in his new car, Jimmy finds that he is still hungry and goes home and eats all the food of his fridge. Still hungry he stops into a neighborhood diner and eats all their food. Returning home, Jimmy tires to take his mind off eating by watching TV. While not paying attention he eats the wax fruit he has on the table. Unable to control his appetite any longer he eats his plants, the dirt off his fire escape, dog food, his curtains, and is boiling up a football when he gets a call from Dr. Falke telling Jimmy that he forgot to give him the antidote.

Taking along a valise full of legal evidence to Dr. Falke's estate Jimmy is told by Mr. Falke that he has to go but his assistant Mike will feed him well before giving him the antidote. To pass the time as the food is cooking Jimmy is allowed to swim in Mr. Falke's pool. However when Jimmy goes to change he finds that Mike has locked him in the change room with the valise full of counterfeit money that Jimmy is supposed to bring to Superman has to show in court the next day. As it turns out, Falke and Mike are the two crooks who would become implicated should Superman have the evidence and that they contrived the whole scheme in order to trick Jimmy into eating the counterfeit money. Sure enough Jimmy seemingly does just that, and the next day he is found by a Scout Troupe who helps him to get to the court case and tell Superman the bad news.

However, things turn around for Superman and Jimmy, as the crooks had mistakenly taken Jimmy's valise full of fake money, and left Jimmy with their own, full of stolen money. Instead of eating the counterfeit money as planned, Jimmy ate the real money and the crooks are busted when they attempt to make a transaction at a local diner.

Retrieved from "https://heykidscomics.fandom.com/wiki/Superman%27s_Pal,_Jimmy_Olsen_Vol_1_38?oldid=1462287"
Community content is available under CC-BY-SA unless otherwise noted.