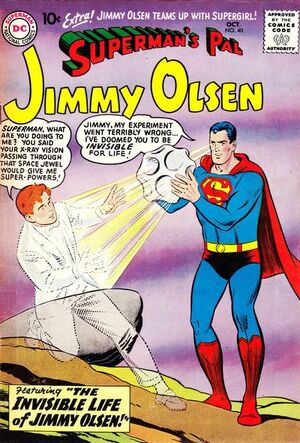 Appearing in "The Invisible Life of Jimmy Olsen"Edit

Synopsis for "The Invisible Life of Jimmy Olsen"Edit

It's Jimmy Olsen's birthday and while he and his closest pals celebrate at the Daily Planet, Clark Kent slips away to change into Superman. The Man of Steel enters the room with a strange meteor, which Superman says will give Jimmy super-powers for a single day when Superman beams is x-ray vision through it. However, something unexpected happens when Superman attempts this: Instead of getting an array of super-powers, Jimmy is made to be invisible. Superman realizes his error and tells Jimmy that he will remain invisible for the rest of his life, and cursing himself, crushes the meteor to bits. Jimmy takes it on stride, deciding that perhaps being invisible for the rest of his life could have it's advantages and could be fun.

After getting some exclusive photographs of Superman in action, Jimmy is left near the Magicians Club. Knowing that it is convention week magicians from all over will be in a secret conference Jimmy exploits his invisibility and slips past security to observe the event. However, when Jimmy writes up the story and hands it over to Perry White, they are shocked to find that the paper has turned invisible as well. When Jimmy turns over the photos he took of Superman he finds that they are invisible as well, and that everything Jimmy touches eventually turns invisible.

Jimmy appears on the game show Jigsaw Jack-Pot and when he wins the grand prize he is less than impressed to discover that it's a 18th century style mirror. Jimmy finds his invisibility is nothing but a hassle when he goes out on a date with Lucy and she becomes so embarrassed that nobody can see Jimmy and that his touch could turn her clothing invisible and tells him that she never wants to see him again. Returning to his home, Jimmy tries to have a simple meal and even his fridge and the food inside are turned invisible. Jimmy gets a phone call from Perry asking him to go down to the police station as there is evidence implicating "Quiz King" Corbin in the murder of a pilot who was the star witness of a plane hijacking.

Jimmy goes down to the station to find that the evidence is a signed letter by the pilot before he died. When the letter is almost accidentally lit on fire, Jimmy quickly grabs it, but in doing so the letter turns invisible and therefore useless. When Perry White learns of this, he fires Jimmy on the spot.

Things aren't about to get better for Jimmy, as "Quiz King" Corbin hears the news about Jimmy Olsen's invisibility powers. Believing that Superman might have turned Jimmy invisible to spy on them and learn the location of their loot, they trick Jimmy into coming to Corbin's hideout where they force Jimmy to take a lie detector test. When they determine that Jimmy was turned invisible by accident and not as part of some trick on Superman's part they go to the collect their loot. However when they dig it up Superman arrives shortly thereafter and captures them.

Later, Superman explains to Jimmy that his entire escapade was a ruse to trick Corbin into going after his loot. That the meteor was never the cause of Jimmy's invisibility at all, but rather a special formula Superman invented and secretly dosed Jimmy with. The next day Jimmy is restored to normal, however when a bill collector comes calling Jimmy wishes he was still invisible.

While doing a report on Colonel Colby's Show of Wonders, Jimmy determines the show to be a series of frauds, and with his big-mouth explains that he intends on writing about it in the Daily Planet. Colby, not wanting the bad press to ruin his operation decides to try and stop Jimmy from completing his story. Returning home, Jimmy fears the worst and decides to use a tin of tear gas that was given to him by Superman for his souvenir collection as a defensive weapon. However, clumsily Jimmy manages to set off the tear gas in his apartment temporarily blinding himself. Witnessing this, Colby decides to take advantage of Jimmy's blindness to try and eliminate him, pretending to be a taxi driver taking him to the hospital. Once in the car, Colby reveals his true identity and drives to a nearby bridge to throw Jimmy to his death. Jimmy activates his Superman signal watch, however the Man of Steel is busy with a photograph device in Earth's core. Supergirl however, hears Jimmy's signal watch and decides to come to Jimmy's rescue.

Supergirl comes to Jimmy's rescue and saves him, revealing her existence to him, however Jimmy isn't quick to believe Supergirl's origins and believes that she is in league with Colby. Supergirl tries desperately to prove to the blind Jimmy that she is the genuine article. However, no matter what she does, be it chop down a tree with her bare hands, to bringing him to the arctic, the sightless cub reporter can imagine up ways how Colby could hoax these abilities to a blind person. As a final ditch effort, she fashions a pair of scissors and asks him to try and cut her hair. However, her x-ray vision picks up trouble at a nearby rodeo, and she is forced to toss the scissors in order to save a cowboy from injury at the hands of a rampaging bull.

Giving up, Supergirl notices that Superman is on his way back from his mission at the center of the Earth, and sets off Jimmy's signal watch again before departing. When Superman arrives, Jimmy tells him about Colby's hoaxes and his attempt on Jimmy's life. Superman then quickly smashes Colby's operation and reveals him to be "Big Con" Colby, a wanted con-artist. Later, Jimmy still believing that Supergirl was another one of Colby's hoaxes, laughs about how preposterous the "hoax" was, insuring that for now, Supergirl's identity remains a secret on Earth.

Perry White is at home with his son Hank when someone throws a rock through their living room window. Looking outside they see a teen gang of juvenile delinquents called the Kings, and Perry realizes that they threw the rock in his window in revenge after Perry has written a series of editorials railing against teen gangs. Tied to the rock is a warning from the Kings to stop writing the editorials or suffer the consequences.

The next day, Perry calls in Jimmy Olsen and asks him to pose as a teenager and infiltrate the gang. Jimmy disguises himself as a greaser named Joe Morley and begins attending classes at Metropolis High. There he puts up the reputation of being an apathetic trouble maker and soon becomes popular among the Kings and asked to join the Kings. However, much to Jimmy's surprise, Perry's son Hank is a member of the group. Hank is less than impressed with the addition of "Joe" to the group and they decide to make him go through an initiation to see if he is worthy of the King. Making him ride a run down roller coaster, Jimmy manages to survive the experience with the secret help of Superman, winning his membership with the group.

Later that night, Jimmy wonders how he can deal with the situation now that he knows that Hank is a member of the gang. The next night the group goes out to a park and attempt to vandalize a Superman statue, however the Man of Steel coats himself in concrete and poses in the statues place. Eventually Jimmy has to fess up to Perry and present his notes over to him, outing his son as a member of the gang. Perry is shocked, but refuses to hide the fact and tells Jimmy to run with the story.

When the gang sprays "Joe" with a seltzer bottle, it reveals his true identity and before the gang can rough him up, Superman appears and breaks up the gang. Jimmy soon realizes that Hank was secretly working against the gang to prove to his father that he has the makings of a good reporter as well as part of a plan to capture the delinquents.

Later at the Daily Planet, Jimmy suggests that Hank get some credit for the story as well.

Retrieved from "https://heykidscomics.fandom.com/wiki/Superman%27s_Pal,_Jimmy_Olsen_Vol_1_40?oldid=1462291"
Community content is available under CC-BY-SA unless otherwise noted.