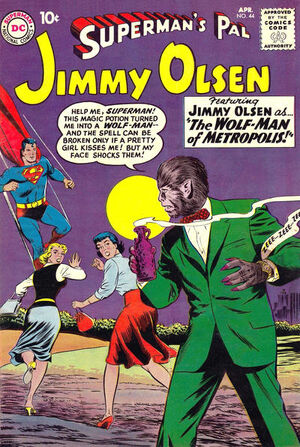 Appearing in "The Wolf-Man of Metropolis!"Edit

Synopsis for "The Wolf-Man of Metropolis!"Edit

After a date with Lucy Lane, Jimmy tries to get some more kisses out of the girl, however she stops him and tells him that he'll get more the following night at the masquerade ball. The next day, Superman arrives at the Daily Planet with a casket that he found in an ancient crypt that contains magic potions. Left alone with the items, Jimmy and Lois dig around inside it and see what they can find. Jimmy finds that only one of the potions -- that which would curse whomever drinks it into becoming a werewolf -- warns that whoever drinks it will be cursed to transform into a werewolf each night until he is kissed by a beautiful girl. Jimmy, figuring that this will be the ultimate masquerade costume and that he could easily get Lucy to kiss him at the end of the night, drinks the potion.

Sure enough, the potion works and Jimmy takes Lucy to the ball, with Lucy dressed up as Little Red Riding Hood. Jimmy ends up winning first prize at the party and when he takes Lucy home he tries to get a kiss from her. When she tells him to take off his "mask" he realizes that he's stuck and flees the scene. When Lucy tells Lois about what happened, Lois wonders if the potion really worked. However, when Lois sees Jimmy the next day he has reverted back to normal. Jimmy meanwhile is trying to contrive a way to avoid being seen before turning into a werewolf again.

However, things don't work out quite so well for poor Jimmy, as he is stuck taking Lucy and Lois along with him to cover a story about a new monster movie being filmed at Mammoth Studios. When the moon rises Jimmy turns into a werewolf again and is pulled aside and offered a job in the movie. Jimmy asks for a ridiculous amount of pay and is thrown out. When he attempts to get a girl to kiss him the following night by offering her his entire savings, he earns nothing but a slap in the face. Jimmy then calls Superman for help who agrees to try and get the antidote for him.

The next day, Jimmy is in the flying newsroom when a gust of wind prevents Jimmy from being able to land on the Daily Planet building. With the helicopter low on fuel Jimmy is forced to land on another building. He then attempts to call Superman, but realizes that his Signal-Watch has been broken. To his misery, as night falls he turns into a werewolf again and gets laughed at by a family and Lois and Lucy. Lucy tells Jimmy that he has to stop with the werewolf stunts otherwise she will cancel their date for the next night.

Superman finally pulls through and has an antidote for Jimmy, however the girl who ends up kissing Olsen is a mystery to Jim. He is cured none the less, and completely unaware that Superman got his cousin Supergirl to kiss Jimmy for him. Later that night, Jimmy keeps his date with Lucy, however he's more interested to know the identity of the mystery woman who cured him and wonders if he will ever meet that mystery woman ever again.

When going over his Superman souvenir collection, Jimmy comes across an Irish Kilarney Stone and mockingly rubs it finding the idea that it can summon a Leprechaun to be ridiculous. To his surprise, a Leprechaun really does materialize, Jimmy doesn't believe it at first until he samples some of the Leprechaun's powers. After the Leprechaun leaves, Jimmy wonders if the whole event really happened.

Unknown to Jimmy, the Leprechaun is in reality Mr. Mxyzptlk who has decided to to take a different approach at causing mischief in the Earth dimension. Instead of tormenting Superman directly he has assumed the guise of a Leprechaun and has decided to cause Jimmy Olsen nothing but grief. Resuming his O'Rourke disguise, Mxyzptlk ruins a date that Jimmy has with Lucy Lane by causing it to rain inside the dance hall they are in. Jimmy calls Superman to help, the Leprechaun causes Superman a bunch of grief before disappearing again.

"O'Rourke" appears again the next day and gives Jimmy a pair of wings to allow him to fly. However the imp causes more trouble by turning a baseball being hit out of Metropolis Park into a giant ball of ice cream. Jimmy calls in Superman who once more combats the "Leprechaun" who then disappears again, taking away Jimmy's wings as well.

Jimmy returns to his apartment and the annoying parrot, when Mxyzptlk returns again Jimmy asks him to do something about the parrots inability to speak anything but gibberish. "O'Rourke" however becomes more interested in Jimmy's souvenir collection and when he takes notice of an eye-chart with his name spelled backwards, Mxyzptlk inadvertently reads Kltpzyxm and banishes himself back to the 5th Dimension while Jimmy is not looking. Later, completely unaware that he was being tormented by Superman's old foe, Jimmy relates on how his "Leprechaun" mysteriously vanished.

While at work at the Daily Planet, Jimmy gets a call from Lucy Lane asking Jimmy to watch her dog Hamlet while she takes on a job for her airline when a co-worker of hers falls sick. Superman meanwhile goes off to his Fortress of Solitude in order to conduct some experiments, telling Jimmy that he won't be able to be reached.

That night Jimmy is out in midtown Metropolis when he spots ex-racketeer "Big Monte" McGraw who is suspected of being involved in a jewel heist recently. Jimmy decides to try and find evidence of the jewel heist and comes up with the idea of posing as a girl and getting a job in the chorus line at the theater that McGraw owns.

Coming up with the identity of Julie Ogden, Jimmy manages to get the job working in the chorus line. When McGraw pays special interest in "Ogden" Jimmy tells him that he is new in town and McGraw insists that "Julie" live with his girlfriend Maisie. Coincidentally Maisie lives in the same apartment building as Lucy Lane, making it easy for Jimmy to check on Lucy's dog and maintain his charade. Jimmy is introduced to Maisie's pet monkey Dora and is then ordered to cook supper.

When "Julie" ruins supper, Jimmy quickly covers by going over to Lucy's apartment to get what she thinks is hamburger and prepares a meal. As Maisie is sleeping, Jimmy snoops around the apartment to find the stolen jewels. The next morning when Lucy returns home she knocks on Maisie's door and asks if they have any pet food as her dog is starving and it turns out that there is no food left in the house. Overhearing this "Julie" becomes horrified as she realizes that what "she" cooked for supper was not hamburger, but dog food.

As his charade continues, Jimmy becomes the object of McGraw's affections much to the displeasure of Maisie. One night when McGraw attempts to get "Julie" to kiss him, Jimmy quickly gets Dora to plant a wet one on McGraw who is too busy in the moment with his eyes closed to realize he's kissing an ape. When going out on dates with McGraw yields no results, "Julie" feigns illness to search Maisie's apartment again. When McGraw hears that "Julie" is sick he decides to pay her a visit. Catching "Julie" going through the apartment, McGraw pulls a gun out and demands to know what's going on. It's at that moment McGraw finally notices that "Julie" has an Adams-apple and uncovers Jimmy's true identity. However, before McGraw can shoot Jimmy, Dora comes up from behind with a baseball bat and knocks McGraw out.

Later, when McGraw is turned over to the police, Jimmy and Superman go over the apartment one more time and find the stolen loot: each diamond was stuck onto a fan with pieces of gum. The reason Jimmy never noticed them before is because the fan was always running. Back at the Daily Planet, Jimmy's coworkers chide Jimmy for dressing up as a girl, however since he landed such a sensational scoop he takes it all on stride.

Retrieved from "https://heykidscomics.fandom.com/wiki/Superman%27s_Pal,_Jimmy_Olsen_Vol_1_44?oldid=1462299"
Community content is available under CC-BY-SA unless otherwise noted.