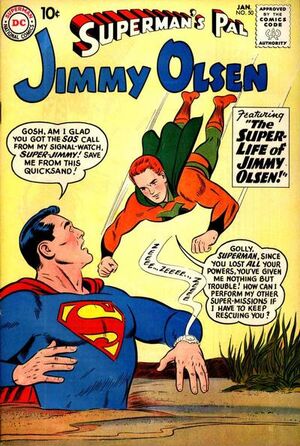 Appearing in "The Lord of Olsen Castle!"Edit

Synopsis for "The Lord of Olsen Castle!"Edit

In order to inherit an ancestral castle in Sweden, Jimmy Olsen must first perform three superhuman tasks, at which Supergirl, Krypto, and Bizarro No. 1 lend him a secret hand.

Appearing in "The Weirdest Asteroid in Space!"Edit

Synopsis for "The Weirdest Asteroid in Space!"Edit

Jimmy Olsen and Clark Kent are accidentally rocketed into space, where they encounter an enormous dragon.

For a birthday gift, Professor Potter siphons off Superman's powers with an invention of Lex Luthor's and gives them to Jimmy. But a mishap occurs and the machine burns out, with the result being that Jimmy may now have Superman's powers permanently.

Retrieved from "https://heykidscomics.fandom.com/wiki/Superman%27s_Pal,_Jimmy_Olsen_Vol_1_50?oldid=1462312"
Community content is available under CC-BY-SA unless otherwise noted.