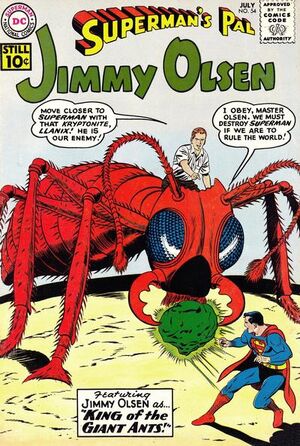 Jimmy Olsen uses his Elastic Lad abilities to put a crooked wrestling promoter on the skids.

Appearing in "King of the Giant Ants!"Edit

Synopsis for "King of the Giant Ants!"Edit

Mr. Mxyzptlk’s hat falls onto Jimmy’s head, giving him the power to make his wishes come true for awhile. But when Jimmy wishes for super-powers, the Red Kryptonite in his hatband gives him a strange and terrible dream of fighting Superman with a kingdom of giant ants.

Retrieved from "https://heykidscomics.fandom.com/wiki/Superman%27s_Pal,_Jimmy_Olsen_Vol_1_54?oldid=1462320"
Community content is available under CC-BY-SA unless otherwise noted.