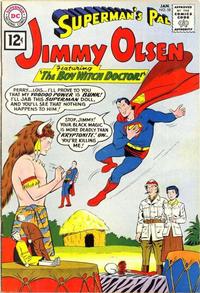 Appearing in "Jimmy the Soda Jerk!"Edit

Synopsis for "Jimmy the Soda Jerk!"Edit

Jimmy Olsen takes a job as a soda jerk to get the goods on an ex-con who is running the business, but manages to botch everything except the sleuthing.

On Jimmy Olsen’s birthday, he burns his hands while grabbing a hot coffeepot and cannot use his signal-watch to summon Superman. Thus, he gives it for the time being to a trusted friend whom he feels he can count on to summon the Man of Steel with it--Clark Kent.

Appearing in "The Boy Witch Doctor"Edit

Synopsis for "The Boy Witch Doctor"Edit

When the Daily Planet crew go to Meteor Island to cover the filming of a new jungle movie there, Jimmy Olsen tries on a voodoo priest’s outfit and learns that when he jabs the effigy of one of his fellow reporters with a pin, the reporter feels pain.

Retrieved from "https://heykidscomics.fandom.com/wiki/Superman%27s_Pal,_Jimmy_Olsen_Vol_1_58?oldid=1462328"
Community content is available under CC-BY-SA unless otherwise noted.