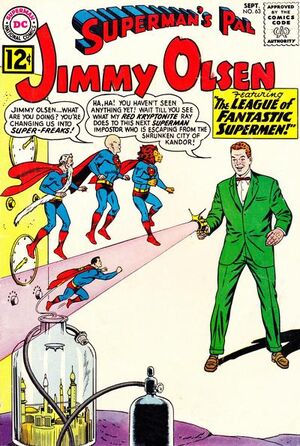 Appearing in "The League of Fantastic Supermen"Edit

Synopsis for "The League of Fantastic Supermen"Edit

Four Kandorian criminals gas the population of Kandor into unconsciousness and escape from the city's bottle. But Jimmy Olsen, visiting in the Fortress of Solitude, uses a Red Kryptonite ray on them, and thus gives the four of them outlandish-appearing heads. Later, the four Kandorians are captured by members of the Legion of Super-Villains who imitate them as part of a plot to free the Phantom Zone villains, but Jimmy, Supergirl, and the Superman robots capture them instead.

Jimmy and Perry White exchange places as part of Metropolis’s annual Boss For a Day event, and Jimmy sends Perry on assignments that will ensure he cannot smoke his trademarked cigars after he discovers that the stogies have been poisoned.

Jimmy and Lucy Lane are captured by Dr. Zarro, a criminal scientist who attempts to pry the location of the Fortress of Solitude from Jimmy by appearing to shrink them both to tiny size.

Retrieved from "https://heykidscomics.fandom.com/wiki/Superman%27s_Pal,_Jimmy_Olsen_Vol_1_63?oldid=1533040"
Community content is available under CC-BY-SA unless otherwise noted.