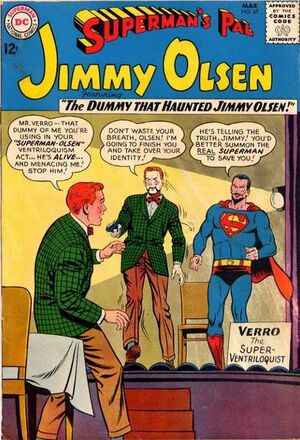 Appearing in "The Dummy that Haunted Jimmy Olsen!"Edit

Synopsis for "The Dummy that Haunted Jimmy Olsen!"Edit

An alien tries to lure Superman into a Kryptonite deathtrap by pretending to be a ventriloquist and getting Jimmy to substitute for his dummy, which appears to be alive.

When Jimmy Olsen gets fired from his job as a Planet reporter, he masquerades as a girl to get it back.

Lucy Lane has been given super-powers by a Red Kryptonite meteor, but Superman has to ask Jimmy Olsen to remove them from her.

Retrieved from "https://heykidscomics.fandom.com/wiki/Superman%27s_Pal,_Jimmy_Olsen_Vol_1_67?oldid=1462345"
Community content is available under CC-BY-SA unless otherwise noted.