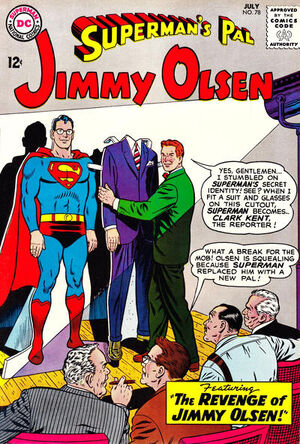 Appearing in "The Revenge of Jimmy Olsen!"Edit

Synopsis for "The Revenge of Jimmy Olsen!"Edit

The FBI considers Jimmy Olsen for a security check and has Superman and Aqualad run a test on him to prove his loyalty, by disguising Aqualad as a new Jimmy Olsen Fan Club member who “replaces” Jimmy as Superman’s pal.

Appearing in "The Baby that Saved Metropolis!"Edit

Synopsis for "The Baby that Saved Metropolis!"Edit

When giant toys from another dimension menace Metropolis, Jimmy manages to turn them aside, though he gets dressed up as a baby in the process.

Appearing in "The Return of Jimmy's Lost Love!"Edit

Synopsis for "The Return of Jimmy's Lost Love!"Edit

Lucy Lane goes undercover as Sandra Rogers again to catch an airmail thief, and Jimmy Olsen, seeing her, becomes Magi the Magnificent once more. Their romance resumes and they catch the thief with Superman’s help. But “Sandra” and “Magi” part, both afraid to reveal their true identities to each other, and both Jimmy and Lucy carry on in silent--and mistaken--sorrow.

Retrieved from "https://heykidscomics.fandom.com/wiki/Superman%27s_Pal,_Jimmy_Olsen_Vol_1_78?oldid=1462368"
Community content is available under CC-BY-SA unless otherwise noted.