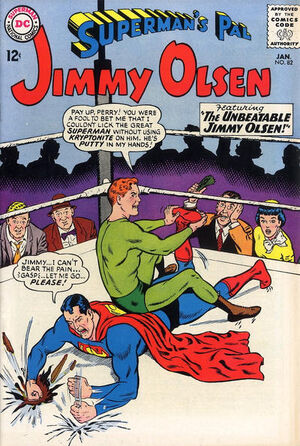 The magic gloves of Merlin allow Jimmy to take on the talents of five different people when he uses them, but the sixth skill will be that of a murderer.

Appearing in "The Wedding of Magi and Sandra!"Edit

Synopsis for "The Wedding of Magi and Sandra!"Edit

Jimmy and Lucy Lane encounter each other once again as Magi the Magnificent and Sandra Rogers and want to marry each other. But Jimmy fakes Magi’s death, worried that Sandra would not accept him after she learns his secret. On the rebound, both Lucy and Jimmy decide to marry each other, do so, and, shortly thereafter, discover to their mutual joy that they are “really” Magi and Sandra. Unfortunately, the justice of the peace who married them discovers his license had expired, and they are not legally wed. Jimmy and Lucy decide to put off marriage, but are excited by the discovery of each other’s “secret identity”.

Appearing in "The Unbeatable Jimmy Olsen"Edit

Synopsis for "The Unbeatable Jimmy Olsen"Edit

Jimmy Olsen is convinced that Professor Potter’s “super-strength serum” has made him stronger than Superman, not knowing the “Superman” he wrestles in the ring is Potter in disguise.

Retrieved from "https://heykidscomics.fandom.com/wiki/Superman%27s_Pal,_Jimmy_Olsen_Vol_1_82?oldid=1462376"
Community content is available under CC-BY-SA unless otherwise noted.