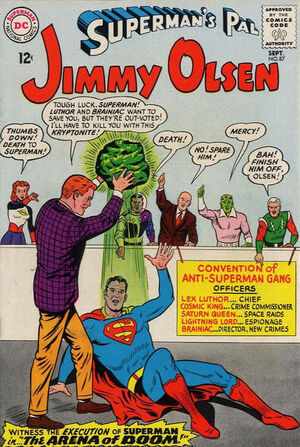 Appearing in "The Arena of Doom"Edit

Synopsis for "The Arena of Doom"Edit

Superman escapes Brainiac’s initial trap, but Brainiac offers to replace Olsen’s human brain if he is allowed to go unharmed. Superman agrees, and Brainiac restores Jimmy’s human brain, but summons Luthor and the adult Legion of Super-Villains to his side and has Saturn Queen mentally control Jimmy. Olsen then signals Superman with his watch, and, when the Man of Steel arrives, appears to destroy him with Kryptonite. But the Kryptonite is fake, and the people of Kandor help Superman trap the villains. Jimmy is released from Saturn Queen’s domination.

Bizarro-Jimmy Olsen No. 1 comes to Earth in search of a scoop, and Jimmy Olsen suggests he become a rock ‘n’ roll star. He becomes a big hit, even though his guitar-smashing bit is vaguely derivative of The Who.

When Jimmy gets hit over the head with a flower pot containing a rare Egyptian flower, it gives him the power of prophecy.

Retrieved from "https://heykidscomics.fandom.com/wiki/Superman%27s_Pal,_Jimmy_Olsen_Vol_1_87?oldid=1462387"
Community content is available under CC-BY-SA unless otherwise noted.