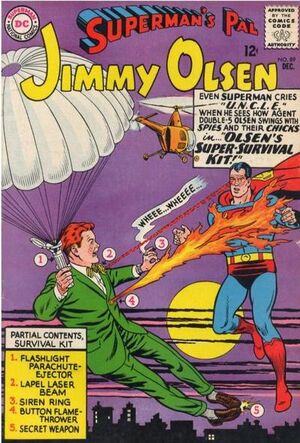 History won't give me the recognition I deserve!

Appearing in "The Infamous Four!"Edit

Synopsis for "The Infamous Four!"Edit

Jimmy Olsen is transported to Nov. 22, 2063 by the power of a magic Indian peace pipe, where he encounters a band of space-pirates called the Infamous Four. The latter are apprehended when they fail to observe the five minutes of silence and stasis on the anniversary of John F. Kennedy’s assassination.

Armed with a brace of secret gadgets created by Professor Potter, Jimmy Olsen goes undercover as a self-styled “Agent Double-Five” to rescue a scientist in a South American country.

Retrieved from "https://heykidscomics.fandom.com/wiki/Superman%27s_Pal,_Jimmy_Olsen_Vol_1_89?oldid=1462392"
Community content is available under CC-BY-SA unless otherwise noted.