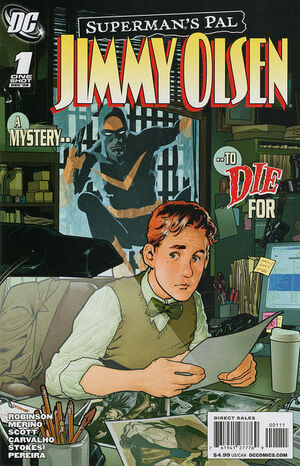 Olsen... this coffee's colder than a widow's sheets.

Appearing in "From a Cub to a Wolf"Edit

Synopsis for "From a Cub to a Wolf"Edit

Jimmy Olsen recalls the recent fight between Superman and Atlas. There is one element of the case that he cannot shake - the presence of a mysterious figure hovering above one of the Metropolis skyscrapers. Having caught a glimpse of the figure on his camera, Jimmy goes to his darkroom to analyze it. He researches the man's face and determines that he is Jonathan Drew, aka, Codename: Assassin. Jimmy begins investigating Drew's past.

His investigation ultimately brings him to Project Cadmus. He finds Dubbilex, slowly bleeding to death in his office chair. Dubbilex tells him how Drew was intimately involved with the actions of Guardian, the first clone of the original Jim Harper. He also learns that Codename: Assassin murdered the original adult members of the first Newsboy Legion.

Solemnly leaving Dubbilex to his fate, Jimmy continues following his leads. They bring him to the town of Warpath, Arizona. He finds that Warpath's sheriff is the former Law Legionnaire, the Vigilante. He presses the Vigilante for information about the current clone of Jim Harper, but the sheriff doesn't volunteer anything he doesn't feel he needs to. Jimmy finds the clone Jim Harper on his own. He is living out of a recreational vehicle with his young daughter, Gwendoline. Harper invites Jimmy into his RV to "tell him a story". Afterwards, Jim begins the long drive back to Metropolis. He now knows that Codename: Assassin is involved in a plot to assassinate Superman.

Retrieved from "https://heykidscomics.fandom.com/wiki/Superman%27s_Pal,_Jimmy_Olsen_Vol_2_1?oldid=1506827"
Community content is available under CC-BY-SA unless otherwise noted.