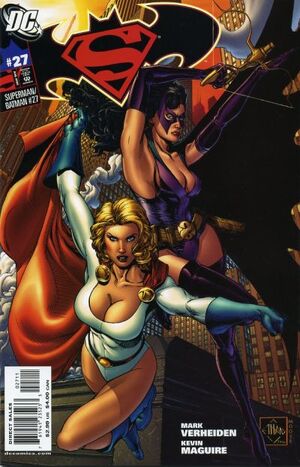 The place: Earth-2. The time: before the original Crisis on Infinite Earths. The Ultra-Humanite has trapped Superman and Batman's minds in the bodies of Power Girl and the Huntress. The two must find where the Ultra-Humanite has hidden their bodies or Power Girl and the Huntress' personalities will assert themselves and both Superman and Batman will cease to exist.

Retrieved from "https://heykidscomics.fandom.com/wiki/Superman/Batman_Vol_1_27?oldid=1460475"
Community content is available under CC-BY-SA unless otherwise noted.