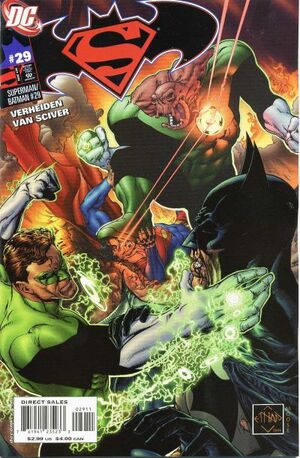 "Shoot first and ask questions later" is supposed to be a wry aside, not a credo.

Appearing in "The Enemies Among Us, Part 2"Edit

Synopsis for "The Enemies Among Us, Part 2"Edit

In the Secret Sanctuary, Batman greets Martian Manhunter by shooting him with a flamethrower. He explains his action, saying that he had been attacked by another shapeshifter, masquerading as the Martian, who had been vulnerable to fire, and that he wanted to be sure of J'Onn's identity before speaking to him. When asked if he had any idea who his attacker could have been, an offended J'Onn refuses to give him any information.

At the San Francisco branch of S.T.A.R. Labs, John Stewart and Sarah Charles examine John's power ring. John had, over the past several days, felt as though the ring were corrupted, a feeling verified by several differences they uncovered in tests, including the fact that the ring was emitting a signal. Suddenly, the lab is attacked by a giant green energy hand, possibly the construct of another Green Lantern, and John's ring is taken.

Alfred Pennyworth informs Batman that he has received a message from Green Lantern Hal Jordan.

At the Daily Planet, Clark Kent is greeted by what appears to be a Lois Lane from the 1930s. The real Lois arrives and knocks the doppelganger out. However, the duplicate Lois transforms into the Caveman from Krypton. Clark changes into Superman, and gets the caveman outside before it can cause too much damage to the Planet's newsroom. Hal Jordan arrives and contains the shapeshifting behemoth in a field of green energy, offering to take it to a new government-run alien holding facility near Edwards Air Force Base. He tells Superman to meet him there later.

Superman arrives at the facility to find Batman, who had been told by Jordan that Superman wanted to meet him there. Suddenly, they realize that Jordan had laid a trap for them, as Batman battles a gigantic alien and Superman takes on Jordan himself. Jordan finally realizes that he has been under control of his ring. As the three theorize what might have happened, Kilowog appears, wearing both his own and John Stewart's rings, and takes Jordan, Superman, and Batman out.

Retrieved from "https://heykidscomics.fandom.com/wiki/Superman/Batman_Vol_1_29?oldid=1460479"
Community content is available under CC-BY-SA unless otherwise noted.