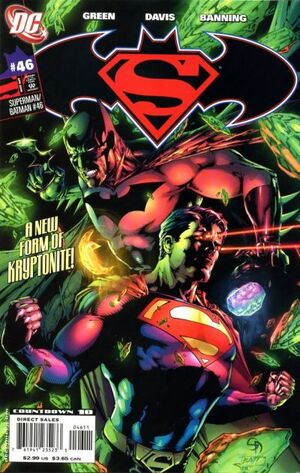 I wish I could take a break. From everything.

Superman is a man obsessed. The story begins as Superman (again wearing the radioactive suit) confronts Metallo, the villain with the kryptonite heart, in Metropolis. Batman observes that Superman has changed during this hunt for K. He's becoming ruthless. After a brief fight, Superman rips the heart from Metallo's torso from behind. But Metallo does not die. Batman has a replacement heart for him that will keep only his life support system operational, not his weapons until Metropolis Special Crimes Unit gets there.

Back at the Batcave in Gotham, Batman has decided that they should go after the different colors of Kryptonite. As Batman continues, Superman wishes for a break. While on patrol, the computer picks up a unknown varietal located at The Oblivion Bar. Batman finds an one half of an amulet known as the Ach-om Rashay inside a stone tablet on the wall and inside is a new kind of kryptonite...silver. Superman is seemingly hypnotized by it and touches it knocking him unconscious.

The scene switches to the Watchtower where Superman is stabilized. He wakes up and begins to exhibit the effects of exposure to silver kryptonite, among them extreme hunger cravings and hallucinations (he sees kid versions of the league). Zatanna finally discovers what they are dealing with, explaining that the amulet was used to enslave the mind of any enemy and the only way to free Superman is to get the other half of the amulet...which is on Dinosaur Island.

Once there, Zatanna and Batman speak to the natives and find out that the other half is buried within a volcano. Zatanna cannot enter the volcano because she "trade in magics like a god" so Batman enters the cave and secures the other half but not before it tempts him with everything that he wants...his parents resurrected, love and family.

Back on the Watchtower, Superman recovers with no recollection as to what happened during his exposure other than feeling relief at finally getting a break. The chapter ends with Batman staring out at Earth possibly regretting his decision back on Dinosaur Island.

Retrieved from "https://heykidscomics.fandom.com/wiki/Superman/Batman_Vol_1_46?oldid=1460513"
Community content is available under CC-BY-SA unless otherwise noted.