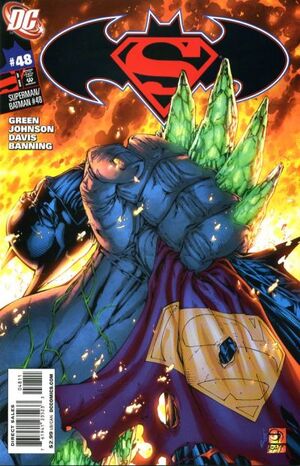 Day I leave your side is the day I die.

The battle between the All-American Boy and Superman rages on. Superman is suffering from severe kryptonite poisoning and feeling his powers slipping further and further away. Meanwhile, Batman is being held hostage by Amanda Waller, who is threatening to reveal his secret identity. All both heroes have to hold on to is their names.

But before Waller can carry out her threat to expose Batman, the fight carries over into the holding area, freeing Batman. The rampage carries on outside of the facility into downtown Smallville, destroying much of the town.

Batman, in the meantime, negotiates a truce with Brannon after he finds out that no one outside of Waller knew about the All-American Boy. They agree to help save Superman.

Superman, who has lost nearly all of his abilities, improvises in Smallville, much the same as Batman would. He blows up a gas station to keep the All-American Boy at bay. The fight comes to an end at the Kent farm, when Batman crashes the Batplane into the All-American Boy with the intent to slow him down. Before leaving the facility, Batman was able to ascertain the identity of the human subject used by Waller and tracked down his parents in the hopes of appealing to any shred of humanity left in him. It works and the All-American Boy is subdued.

Waller arrives still intent on arresting Batman & Superman. Batman threatens to go public with Waller's entire black-op project if she doesn't give them the Kryptonite and assist in the rebuilding of Smallville. She reluctantly agrees but tells them that their search for K isn't over just yet. The weapons and the kryptonite used by the Last Line were supplied by LexCorp.

The issue ends quietly with dinner around the Kent family table.

Retrieved from "https://heykidscomics.fandom.com/wiki/Superman/Batman_Vol_1_48?oldid=1460517"
Community content is available under CC-BY-SA unless otherwise noted.