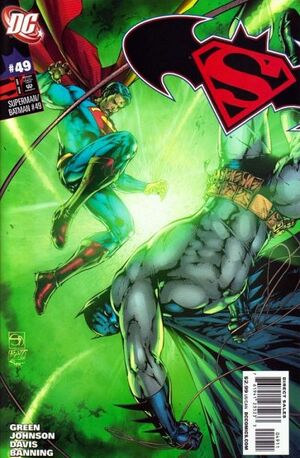 Let them all know. That when they need one...when they want one...they have a savior. And he is safe again.

Superman is still shocked after finding out that LexCorp is the group behind designing and outfitting the US Government with Kryptonite weapons. Batman is not. While on their way to LexCorp to get answers, they are attacked by Kryptonite missiles. Batman is convinced that Amanda Waller tipped off LexCorp to their impending arrival. With Lex Luthor currently on Hell Planet, that means that Lana Lang is the one behind the weapons. Superman can't believe that for a minute and heads to confront her while Batman goes into the bowels of LexCorp to see if she's lying.

While Batman handles LexCorp security, Superman confronts Lana and she admits that she is behind the weapons. She explains it was a purely business decision to save LexCorp from bankruptcy. Superman is furious and demands that she reveal where the Kryptonite reserves are. Lana refuses. Batman discovers that the Lexcorp cache is over a megaton but it's not just in one place. Lana then reveals that there are over a thousand dirty bombs placed around the world and she can activate them with a push of a button thereby making the Earth uninhabitable for any Kryptonian. Superman calls her bluff and orders Batman to blow the mainframe. But Lana wasn't bluffing. She pushes the button. The bombs go off. Superman, Chris Kent, Krypto and Supergirl all have to evacuate to the JLA Watchtower.

While on the Watchtower, Batman is contacted by Hiro Okamura, who offers up his robotic spiders to remove the world of kryptonite in exchange for a date with Power Girl. Batman agrees. Within an hour, the Earth is free of kryptonite and all can return home again.

Later, Superman confronts Lana one more time, telling her that Lex would be proud. She apologizes to little effect. Superman leaves and Lana is last seen with a tear rolling down her cheek while an unseen, mysterious voice congratulates her on a job well done.

With all the K gathered up, Superman decides to throw it into the far side of the sun. Batman tells him to throw it directly into the sun so people can see that Superman is now safe. They meet at the top of the Daily Planet where Superman gives Batman one final piece to hold just in case of an emergency. Batman promises to keep it safe and stores it in a secure part of the Batcave - a section that holds a small cache of every color of Kryptonite.

Retrieved from "https://heykidscomics.fandom.com/wiki/Superman/Batman_Vol_1_49?oldid=1488731"
Community content is available under CC-BY-SA unless otherwise noted.