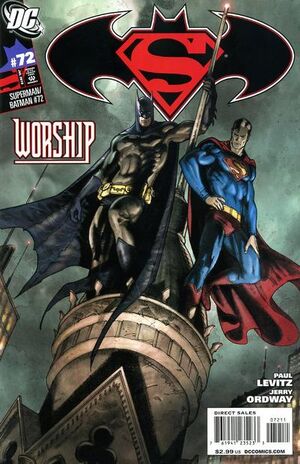 No thug is going to kidnap me! I've worked out with the best!

Superman flies through space to take care of a dangerous comet on a collision course towards Earth. He destroys the comet, but trace amounts of Green Kryptonite are present and temporarily weakens Superman's powers. He crash lands on an alien planet and levels a civilian construct. He executes a quick rebuild and flies back towards Earth.

Meanwhile on Earth, Lois Lane attends funeral services for a recently deceased Daily Planet employee. After the service, she is greeted by a driver who offers to take her back to the Planet. As she gets into the vehicle, she quickly realizes that the occupants are men who intend her harm. She tries to fight back, but they subdue her and take her elsewhere. Lois activates an emergency signal on her wedding ring.

Superman fails to pick up the signal, but it is received by another. In Gotham City, Batman picks up Lois' signal. After determining that Superman is unavailable, Batman decides to investigate himself. He travels to Metropolis and trace's Lois' signal to a warehouse. Batman's actions come to the attention of Lex Luthor who uses his city-wide surveillance systems to keep an eye on him.

Later, Lois' kidnappers bring her into the middle of the woods. They are in fact a cult of Superman worshippers who, unaware that Superman and Clark Kent are one in the same, believe that Lois has defamed Superman's honor by choosing a mortal mate over the Kryptonian. They tie her to a wooden stake and set it on fire.

Retrieved from "https://heykidscomics.fandom.com/wiki/Superman/Batman_Vol_1_72?oldid=1510674"
Community content is available under CC-BY-SA unless otherwise noted.