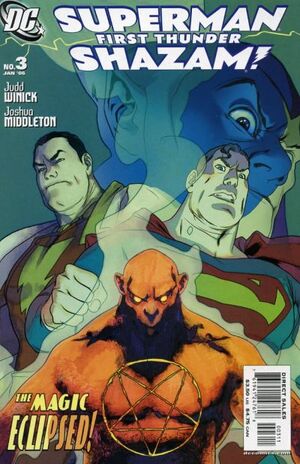 He's got bigger fish to fry than a low-rent, demonic, force-wielding butt troll!

Spec begins wandering through the subway system of Fawcett City. He questions the local riff-raff, asking them if anyone has seen a small boy matching the description of Billy Batson.

Meanwhile, the villain known as Sabbac runs amok throughout the city. Captain Marvel and Superman team-up and tackle him, but Sabbac keeps them at bay by breathing a gout of fire in their direction.

Across town at the Solar Center, Doctor Bruce Gordon transforms into the Spirit of Vengeance known as Eclipso. He places one of his black crystals into a refracting dish at the Solar Center sending a beam of black energy into the sky. The beam splinters, arcing back downwards striking several people – all of whom transform into obedient servants of Eclipso.

Superman breaks off from fighting Sabbac (as he is vulnerable to magic) and flies off to face Eclipso. He sends his eclipsed servants to overtake the man of steel but he pushes them back with a blast of arctic breath. Superman cuts Eclipso off from the crystal that provides his power, transforming him back into the body of Bruce Gordon. With Eclipso's influence eliminated, all of his brainwashed underlings return to normal.

Captain Marvel meanwhile continues to fight Sabbac. He discovers that the root of Sabbac's powers is very similar to his own. He tricks his evil adversary into saying his own name aloud, thus transforming him back into the frail Timothy Barnes.

As the immediate dangers pass, Superman and Captain Marvel say goodbye to one another, and Superman flies off back towards Metropolis.

Retrieved from "https://heykidscomics.fandom.com/wiki/Superman/Shazam:_First_Thunder_Vol_1_3?oldid=1492018"
Community content is available under CC-BY-SA unless otherwise noted.