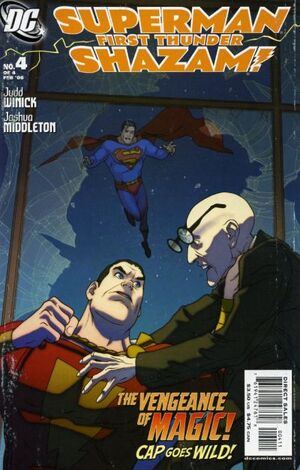 I'll remind you before you tell me that again, that I've got a gun in my desk and I'm drunk.

Appearing in "Men and Boys! Gods and Thunder!"Edit

Synopsis for "Men and Boys! Gods and Thunder!"Edit

Doctor Sivana is furious that Spec has failed to sanction Captain Marvel. However, he believes that Marvel may be connected to a small child that lives in a nearby subway. Sivana's assistant, Mister Tan questions the morality of killing a child, but Sivana responds with, "I'll get over it".

Later, Spec and a group of armed soldiers storm the subway tunnels. They open fire on Billy Batson's position, forcing him to transform into Captain Marvel. Marvel causes the mercs to scatter, and manages to apprehend several of them, including Spec. When the dust settles, Marvel finds that his best friend, Scott Okum, has been killed in the crossfire. He rushes him to the hospital, but it is too late.

Enraged, he barges into police headquarters and forces Spec to give up the name of the man who hired him – Sivana. He then flies to Sivana Industries prepared to kill the cantankerous industrialist. He grabs him about the throat and slowly begins choking the life out of him. Sivana pleads for his life, and Marvel grudgingly lets him drop to the floor.

The following day in Metropolis, Clark Kent reads a report on Marvel's citywide rampage. He tracks him down to Mount Everest, and tells him that he has crossed the line. A tear-filled Marvel tells him about Scott, and reveals that he is actually just a boy himself. Superman is astonished. After learning Billy's history, he demands an audience with the wizard Shazam.

Shazam agrees to meet with Superman at the Rock of Eternity and Superman chastises him for subjecting a boy to such a fate. Shazam defends his decision, but tells Superman that Billy may also need some guidance.

Later, Clark Kent shows up at a flophouse where Billy is staying. He sits down next to him, and reveals that he is also Superman.

Retrieved from "https://heykidscomics.fandom.com/wiki/Superman/Shazam:_First_Thunder_Vol_1_4?oldid=1529173"
Community content is available under CC-BY-SA unless otherwise noted.