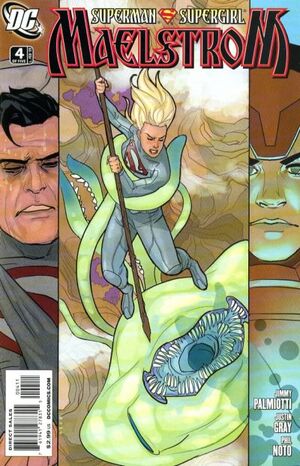 Superman has taken Supergirl to an alien planet without a yellow sun, making them powerless, so she can learn to be less dependant on her powers. After Superman regains consciousness, he gives Supergirl “the speech”. Meanwhile, Maelstrom and the Female Furies arrive on Earth, looking for Superman. Finally, Superman and Supergirl head back home to Earth.

Retrieved from "https://heykidscomics.fandom.com/wiki/Superman/Supergirl:_Maelstrom_Vol_1_4?oldid=1460628"
Community content is available under CC-BY-SA unless otherwise noted.