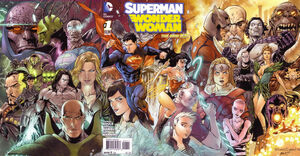 We give them everything. This is ours. At least for now.

As a storm forms in the North Atlantic, Superman insists that he can handle deactivating the convection engine that seems to be causing it all. Wonder Woman doubts him, but he confidently promises that they will be done with time to have dinner in Oslo later. She leaves him to it, speeding off to rescue a plane caught in the storm. As superman dives under water, he tries to feel as confidently as he projected himself, but when he lays eyes on the source of the storm, he realizes that the situation is much worse than he thought.

Earlier, Clark had a meeting with Cat Grant at the Ace o' Clubs to discuss finding stories for their joint venture as a journalistic website. Cat was concerned that recycling other people's stories was losing them traffic, and it was Clark's responsibility to find the big stories. If they didn't break something soon, their readership would fizzle, and there'd be no way to rebuild it.

At the same time, in London, Diana was sparring with her friend Hessia, one of the few Amazons who survived Hera's attack on Themyscira, where their sisters were turned to stone. Neither Amazon is happy about it - particularly Diana, whose mother was among those transformed. Eventually, Hessia decided to yield, knowing well that the princess was a stronger fighter - and a younger one, to boot. After all, Diana might never age, as Hessia has, given her divine parentage.

As Clark excused himself from lunch with Cat and her recently arrived boyfriend Aaron, Diana complained to Hessia that being unable to be open about her relationship with Superman had made her worry that he was ashamed of her. Hessia reminded that Clark had grown up learning to hide his true self, to protect those he loves. Amazons, though, celebrate their uniqueness and power, which is why his behaviour confused Diana so. She resolved, then, to try to show him how to be open about it, perhaps even later that night.

Now, as Wonder Woman attempts to rescue the crashing plane, she is dismayed when Superman rockets up out of the ocean, smashing through one of the plane's wings, apparently thrown by something. Tearing open the fuselage and grabbing up the pilots in each hand, she watches as Superman recovers, explaining that something was waiting under the water, but he couldn't see what it was. As he takes the pilots from her, promising to get them to safety, he warns Diana not to go down into the sea until he returns. Unfortunately, once he has gone, an explosion unbalances her, and Wonder Woman falls from the sky into the water.

Earlier that evening, Diana had been visited by Clark, who had brought her a rare, alien flower cut from one of the plants in his fortress. Slyly, she responded that with all of the wonderful things he keeps in that fortress, he might think to let some people see them. Sighing, Clark stated that there are things in the fortress - in his life, that would be better left secrets. One of those secrets is their relationship, which he explained that he keeps a secret both because he must and because he wants to. After all, as heroes, Superman and Wonder Woman give the world everything. For the time being, at least, their relationship would remain theirs. Smirking, Diana admitted that she had got him a gift as well, raising the sword her brother Hephaestus had given her. Clark misinterpreted her intentions, but she explained that she meant to train him. While Superman may be strong, he is not known for his ability to fight. Who better than the God of War to teach him?

Meanwhile, at the offices of ClarkCatropolis.com, Cat ignored yet another pile of mail, leaving it - and many other letters - unopened.

Now, a military ship, the KNM Naddoddr prepares to make its second shot against Wonder Woman, believing her responsible for the destruction of the plane she had saved. They find, though, that their forward gun mount will not function because the Amazon is angrily tearing it to pieces, wondering why they would fire on her when she had tried to help. Suddenly, though, she is surprised by a sudden jolt on the ship's deck, as Doomsday makes his landing there. Diana does not hesitate in her attack, remembering how her evening with Clark had been disrupted by the news of the storm that brought her to this point. As Doomsday grips her around the neck, she worries that they were foolish to think they could handle it.

Retrieved from "https://heykidscomics.fandom.com/wiki/Superman/Wonder_Woman_Vol_1_1?oldid=1460638"
Community content is available under CC-BY-SA unless otherwise noted.