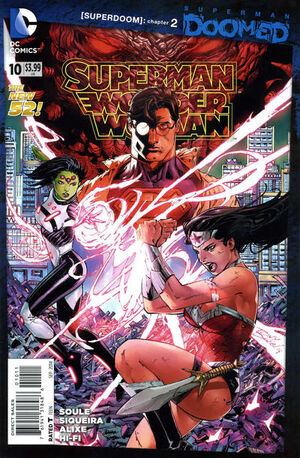 If you're going to fight, fight Brainiac, not me. We should be allies. Let me help you.

Lana Lang and John Henry Irons are in space, nearly 500,000 miles inside the orbit of Jupiter, and they are under attack by the Cyborg Superman and his army. Unfortunately, Lana and Steel have knowledge they need to pass on to Superman, that the world is depending on. Their own lives aren't important, except that other lives depend on theirs. Steel explains that the short-range comms are still working, and suggests that Lana call him and tell him what they know about Brainiac.

Though he hears their message, Superman is overcome by the Doomsday virus in his system, and he is preoccupied with destroying the unmanned ships that are attacking Lana and Steel's ship. Worrying, Steel watches what his friend has become and hopes that it is what they need right now.

Meanwhile, in Metropolis, the military has cordoned off the city following a disaster that has shut down the entire city. Satellite imagery shows that the entire city fell comatose at once, causing massive casualties as a result of car accidents and the like. Though Wonder Woman has been in the city removing those affected from the city, anyone else who enters the city seems to become affected as well. Lois Lane however, marches right past the military cordon unchallenged. She walks straight into the middle of the city and transforms into Brainiac. Spotting her, Wonder Woman tries to ascertain just what has happened to Lois, and nonchalantly, Lois explains that she now controls all the machines in the city, and while she knows she is not behaving normally, she feels as though she is an observer outside her own body. She then attacks Wonder Woman outright.

Steel dons a space-suit to go and speak with Superman directly, explaining that the ships were part of a larger fleet headed for Earth. Lana had discovered the signal that was originating in deep space and aimed at the fleet. The fleet is now boosting it, splitting it, and pointing one signal back at Smallville and the other at Metropolis. Both he and Lana believe that the Earth is under attack. Superman states that he has heard all he needs to and flies off, despite John's worries that they will need more help than just he can provide.

Lois' attack on Diana invades her mind and her memories, forcing her to relive them. Angrily, she deflects Lois' energy blast with her bracelets. She wraps Lois in the Lasso of Truth and demands to know who is forcing her to fight so cheaply. Lois responds that she serves the Collector - Brainiac, preparing his path. Metropolis and Smallville are merely two successful tests. She then reveals that she can bring Metallo back to life using the memory collected by Brainiac, and she uploads his identity back into his machine body in order that he can serve her by attacking Wonder Woman.

The Cyborg Superman is acting in the service of Brainiac as well, playing his part following Lois' preparations on Earth. Soon, every mind on the planet Earth will be collected for Brainiac. Doomsday's attack was engineered by Brainiac and the Phantom King, and it was a success. As they approach Earth, the Cyborg spots Superman waiting to stop them, and decides to face him alone.

On Earth, Wonder Woman is disgusted with Lois' use of her memory of John Corben - which is ultimately flawed - as it represents only the parts of him that were infatuated with her. She warns that Lois must accept that John is dead, just like she had to accept that the Superman she loved is gone in order to begin healing. This charade with Metallo is helping no one. With that, she destroys his containment suit, enraging Lois. However, Lois receives orders from Brainiac that Wonder Woman's efforts are irrelevant, and she should move to the secondary staging location. Acquiescing, Lois grabs John's head from the broken machine that was his body, and flies off. Wonder Woman decides not to give chase.

Superman is disgusted by the Cyborg Superman's use of the symbol of the House of El, promising to tear it from his chest before destroying the fleet of ships headed for Earth. The cyborg responds that whatever happens to him, Superman can't destroy the entire fleet. Superman must admit that he is right, but he will not allow the Earth to go unprotected. He won't allow Lois to go unsaved. The virus inside him warns that the only way to ensure that he is successful is to succumb to its effects - which will see everyone die anyway. That suits the virus just fine.