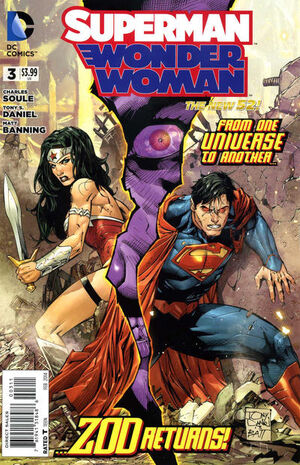 Jor-El... He was my father. You knew my father?

On the dark side of the moon, Superman receives a message from Batman, demanding to know what's wrong with him. He is aware that something is troubling Clark, and presses him to talk. Clark explains that after he was attacked by Apollo, he felt his body filling with more solar energy than he had ever imagined he could contain. Unsure of whether he could control it, he tried to burn off the energy by flying around the earth 300 times, and finally, hiding on the dark side of the moon - away from the sun. Unfortunately, it was to no avail. He doesn't have control, and he cannot be trusted to be around the people of Earth. Sympathetically, Bruce urges Clark to keep talking, reminding that they don't yet know that much about the nature of his powers in the first place, given Krypton's destruction. Bruce suggests that it might be best for Wonder Woman to stay with Clark while he struggles with this, but Clark points out that she is the last person he wants to see him like this.

Diana, meanwhile, is in London at the famous Harrods department store, shopping for Christmas. She is aware that Clark celebrates the holiday, but she must admit to her friend Hessia that it is alien to her. Slyly, Hessia points out that Diana is hardly the first woman to stress about her first Christmas with a new man. She assures Diana that the holiday isn't so much about the gifts one gives as the thought behind those gifts. If she can show Clark that she knows who he is, he will be happy with her choice.

Clark is uncomfortable with the idea that Doomsday could have killed Diana during their last encounter, regardless of the fact that any one of Earth's heroes could be killed at any moment as part of the nature of their lifestyle. As far as he is concerned, Doomsday is part of his past, and is therefore his problem. Batman reminds that Diana is strong enough to make her own choices about which battles she fights, and in any case, as a couple, she and Clark must face each other's problems together as a team. His problems are her problems too, as hers are now his. Bruce points out that one of the only reasons he is comfortable working with a man as powerful as Superman is because he was raised as a human. While he grew up believing that he was an ordinary person with exceptional abilities, Diana was raised to believe she was exceptional - and that being exceptional is the standard for how things are. He reminds that Clark will want to remain the dumb farm boy, in some respects - and not become like him. As they talk, the a notification warns that an inter-dimensional incursion is in progress, and Superman decides to get back to work.

That dimensional incursion happens to be the arrival of Dru-Zod in North Africa. Witnessing a vulture circling the pile of bodies he mangled and murdered there, Zod is surprised to learn that he can fly as well. As he revels in that experience, he is surprised to be knocked out of the sky by Martian Manhunter and the Justice League of America. Though unfamiliar with Zod's reputation, his animosity is obvious, and Steve Trevor suggests that Vibe try his hand at subduing him. Seeing little effect there, Martian Manhunter reluctantly uses his heat vision to melt the sand around Zod into a glass case, leaving a small air-hole. Unfortunately, Zod soon breaks out of the prison. When Hawkman discovers that his mace is of little use either, they realize that they are outmatched.

Suddenly, though, Wonder Woman's Lasso of Truth wraps around Zod, and he seems to lose his will to fight. Superman presses Steve for information, and is unimpressed with how little the man has. Influenced by the lasso's power, though, Zod introduces himself, explaining that he was confused when he attacked them, and will make recompense. He recognizes Superman as a Kryptonian, and as a member of the House of El. Grumpily, Steve notes that this is the third Kryptonian to arrive on Earth in recent memory. Compounding that worry, Zod begins asking after others like him - a woman named Faora in particular. Having sensed Zod's arrival, Vibe responds that he did not feel anyone else crossing into their dimension.

Steve begs Diana to help him transport Zod back to A.R.G.U.S. Headquarters, but she wonders what right he has to claim Zod as his prisoner. Superman intervenes, warning that as Zod is of his people, it is to him that the responsibility falls; the responsibility to protect his people from Earth, and not the reverse. Diana agrees, and they carry him away to the Fortress of Solitude.

There, Superman prepares a room within the Fortress' menagerie, apologizing for the poor quarters. Graciously, Zod accepts them, admitting that he would not fully trust anyone who had escaped the Phantom Zone either. He adds that he would be happy to speak with Kal about his father Jor-El, but in the meantime, he is eager to learn of any word that Faora crossed through as well.

Leaving Zod to get comfortable, Diana takes Clark aside and admits that she got him a Christmas gift - though it is early. She calls through to Batman, who confirms that the gift is ready. Confused, Clark wonders what the present is, and smirking, Diana explains that the gift is time; free time. She had their friends pull together to handle things in their stead for a short while that they could spend together without worry of being called away. Happily, Clark kisses her, but the moment is cut short when Clark begins to hear word from around the world that the media - the world knows about their relationship, and the world is worried.

Retrieved from "https://heykidscomics.fandom.com/wiki/Superman/Wonder_Woman_Vol_1_3?oldid=1460642"
Community content is available under CC-BY-SA unless otherwise noted.