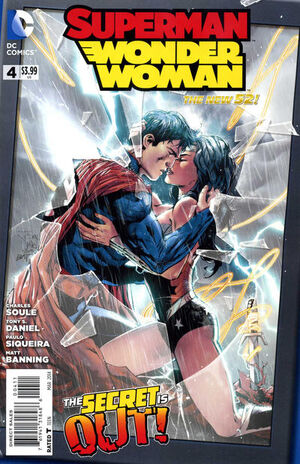 For there is at least one truth, and both of us know it. It's one of the things that calls us to each other, despite everything. Because someday our battles will end. And there would be no greater tragedy... than facing that end alone.

Appearing in "What Any Man Would Do"Edit

Synopsis for "What Any Man Would Do"Edit

The world has finally learned of the romance between Superman and Wonder Woman, and Diana isn't convinced it wouldn't be a good idea for Clark to let go of his secret identity as Clark Kent and just be Superman, meeting the expectations about whom a woman like Wonder Woman could be with. Clark insists that he chooses to remain Clark Kent because it is a challenge, just as being a writer is a challenge to him. On that subject, he has business to attend to. The story of their relationship came from his shared website with Cat Grant, and he needs to find out how it happened. With concerns still high between them about the arrival of Zod and the Doomsday attack, he asks Diana to meet him later at the Fortress of Solitude, and she concedes, wondering to herself whether there might be a compromise between their two differing views of the world.

At the Fortress, meanwhile, Zod has escaped his room in the menagerie, and discovered the monitoring room. From there, he decides that the planet earth will suit his plans nicely. He moves on, discovering the location of the Phantom Zone portal. From its readings, he learns of just how Jor-El sent his son to this planet. In a rage, he nearly destroys the computer, but restrains himself, promising that there are other ways for him to get his revenge.

By the time Superman returns to the Fortress, Zod is back in his room at the menagerie, and he ignores his guest's cryptic hints about his past with Jor-El, demanding instead to know of Doomsday and why he was trapped in the Phantom Zone. Zod responds that he volunteered to enter the zone to watch over Doomsday. When he learns that Doomsday was seen on Earth, Zod becomes agitated, warning Superman to bring a Phantom Zone Lens to him immediately. Soon, Clark has the device in front of him, and Zod instructs him to turn it on. With that task completed, Zod speaks a single Kryptonian phrase, causing the bubble around him to dissipate. Clark is surprised, and Zod scornfully remarks that Clark doesn't even understand the technology of his own people. These things he keeps his acquisitions in are not cages, they are shipping containers designed to be opened with a simple pass phrase. Because Clark didn't know about it, Zod was able to assume the phrase would be the default, and was correct to do so. And, like his container, all of the other containers can be opened with the same phrase. Loudly, Zod calls the phrase out, setting every creature within the menagerie free.

With Superman distracted by the creatures, Zod begins trying to open the Phantom Zone to pull someone through. Superman attempts to focus on his real enemy, and demands to know what Zod is doing. Determinedly, Zod explains that if Wonder Woman were trapped in the Zone, Superman would do anything to pull her out. He has someone trapped within the Zone, and he will not be prevented from getting her out. Before Superman can do anything, Zod has successfully pulled a ragged Faora Hu-Ul from the Phantom Zone.

Appearing in "The Blog Read Around the World"Edit

Synopsis for "The Blog Read Around the World"Edit

Seeking answers as to how the news of his relationship with Wonder Woman got out, Clark Kent returns to the offices of Lord Innovation, where Cat Grant gleefully embraces him, celebrating their website's success. Feigning pleasure, Clark admits that he wishes he had known about the scoop before it went to print. Cat points out that he would have known if he'd answered his phone. When Clark asks just how she got the story, Cat names a price: he has to stay at the party and enjoy himself, for once. Naturally, the world is talking now that they know - and they're saying everything.

Forced to enjoy the party, Clark takes the opportunity to ask Cat's boyfriend Aaron who is hosting the party what he is working on. Currently, his lab is working on an "instant learning" device, capable of teaching its user things like languages and trades within an moment. Unfortunately, it's not complete. He believes that it needs to be completed, though. Humanity requires an edge against the super-humans. If humans can't accelerate their own development, the super-humans could easily take over without any resistance. Clark tries to make a case that the super-humans might just want to help, and Aaron concedes that he tends to rant about it, and offers Clark an invitation to chat over beers without all the baggage of his work. Turning to Cat, Clark wonders if he's earned the information he wants to know yet, but she warns that he must socialize until she deems him worthy of it.

Meanwhile, at the Utah Hypermax Detention Facility, Lex Luthor is disturbed to learn from one of his guards about Superman and Wonder Woman's relationship. In his mind, they are not people, given their unpredictable and horrendous power. Grumbling, he sends the guard away, complaining that while he'd planned for this contingency, he'd never thought it would actually happen.

In Gotham City, Batman sees the news airing on one of Gotham Square's big screen displays, and uses his batarangs to short out the screens, preventing the citizens from hearing anymore.

In London, Diana drops by her friend Hessia's girls-only karate class, prompting Hessia to end class early to talk. As a compromise, she promises that Diana will tell them all something inspirational. After a moment of racking her brain, Daiana explains that they are all fearce warriors, and Hessias lessons will give them strength and confidence that they should hold dear. These girls should determine for themselves who they are, and grow up to be wonderful women in their own right. With class dismissed, Diana asks Hessia to spar with her, in the hopes of letting off some of the steam that the stress of the news getting out has built up in her.

After a gruelling battle, Diana remarks that while she had wanted Clark to be more open in their relationship, that relationship should not have become the world's fodder. It should not have left their control. Hessia suggests that Diana should focus her attention on the other aspects of her life, and the princess suggests that it is high time she returned to Themyscira.

Finally, Cat explains to Clark how she received a flash drive in the mail without a return address or accompanying explanation. Unlike the Daily Planet, Cat and Clark have the luxury of running a story without due diligence. Clark points out, though, that whoever sent her the file must have some kind of agenda. Cat reminds that if they hadn't run the story, someone else would have. But why them, Clark wonders. Cat suggests that if Clark intends to look more deeply into it, that is his business, but warns that he shouldn't look a gift horse in the mouth.

Retrieved from "https://heykidscomics.fandom.com/wiki/Superman/Wonder_Woman_Vol_1_4?oldid=1460644"
Community content is available under CC-BY-SA unless otherwise noted.