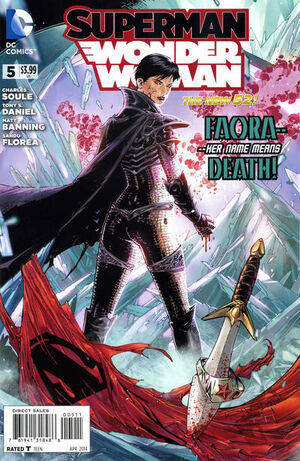 You two have a spat, and the world burns? How can you not be aware of the stakes of what you're doing?

Wonder Woman returns to her home island of Themyscira to visit her mother, who was turned to stone, victim to the wrath of Hera, who was jealous that Hippolyta had had an affair with her husband Zeus - the same affair that had seen Diana conceived. The Amazons that Diana had once called sisters were transformed into snakes, and she is forced to step around them as she approaches the statue that was her mother.

Diana first begs forgiveness for failing to free her, and for failing to visit more often. Unfortunately, like many children, she has only come to her mother because she needs something: to confess her weakness. She explains that her decisions to choose Superman as a companion is causing her strife because he refuses to give up his double-life for her, and it is a life that she cannot participate in. Truth be told, she doesn't know that Superman wants her to be a part of it. This doubt troubles her because she is used to the strength of both will and form that come with being the daughter of a god. Why, in any case, would she worry about a man?

Meanwhile, Superman has come under attack by the monsters that he had kept within his menagerie at the Fortress of Solitude. They were released when Zod released them, speaking the password that unlocked the storage containers that Superman had misinterpreted as being cells, unaware of his home planet's cultural norms. With Superman so distracted, Zod had the opportunity to pull an ally - Faora - from the Phantom Zone and escape with her.

Diana's attention is drawn by the hissing of the Amazon snakes, who lead her away, slithering toward the great doors to Tartarus. She is disturbed to see that the doors that the Amazons had guarded for generations have been broken down in the Amazons' absence - and something has got out. Eventually, Wonder Woman finds the demon that escaped from Tartarus on the island, and destroys it, sealing the doors shut again with her Lasso of Truth.

By the time he gets outside to give chase, Clark has lost track of Zod and his companion, and so he calls on Batman to ensure that the rest of the Justice League stay out of it. Batman warns that Clark needs help, and should contact Wonder Woman, but she's off the grid, and Clark is concerned that it's because of a discussion they had. Annoyed, Batman reminds that they can't afford to let a spat make the world suffer, but agrees to speak to Cyborg about it.

As they speed away, Zod tries to calm Faora, whose reaction to this planet's atmosphere has made her aggressive and incoherent. She responds to his reasoning by fighting him, requiring that he fight back, pinning her to the ground. Soon, the suns rays soak into her body, and she regains her sanity, happy to know that Zod is there, and that their plan worked. They are interrupted by Superman, who demands an explanation. Zod explains that, together, he and Faora could easily take this child of the House of El down alone.

Preparing to leave the island, Diana says her goodbyes, and as she steps onto the island's beaches, Cyborg's message finally gets through to her, warning that Superman needs help. Hurriedly, she rushes to help. Soon, she arrives, finding Clark in dire straits. Grimly, she warns in their native Kryptonian that they are fools to challenge Superman because she will defend him.

As he engages with Superman, Zod explains that he doesn't want to kill him. After all, they have lost so much of their home that his death would be a waste. He should join them instead. If Clark refuses, he will not be allowed to turn Zod from his purpose. He wraps his fingers around Clark's neck and begins squeezing, and shouts for Wonder Woman, who has done the same to Faora. He suggests that rather than killing each other's companions, they should let their victims go, part ways, and regroup later.

Against Superman's protests, Diana agrees, explaining that it is not a loss, but a strategic retreat.

Retrieved from "https://heykidscomics.fandom.com/wiki/Superman/Wonder_Woman_Vol_1_5?oldid=1460646"
Community content is available under CC-BY-SA unless otherwise noted.