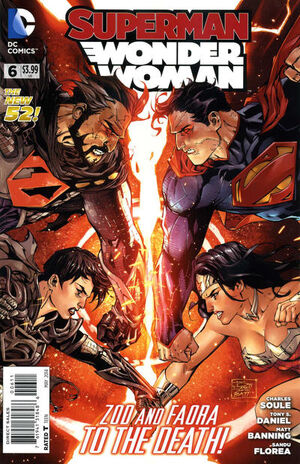 Appearing in "Until the End"Edit

Synopsis for "Until the End"Edit

At the site of a decommissioned atomic test facility located on an island in the South Pacific, Zod and Faora Hu-Ul are building a Phantom Zone Projector of their own, using technology stolen from Earth's secret government facilities.

Superman and Wonder Woman, meanwhile, are soaring over Mount Etna when Diana realizes that Clark has something to say that he's been holding back. He explains that it's a question. After being faced with a threat from his home world that could potentially do her damage, his focus has shifted from beating them to protecting her. His question then, is whether they were better before they started a romance, or are they better now? Smiling coolly, Diana responds that if she'd thought that their effectiveness was compromised by their feelings, she wouldn't be involved with the relationship. Having wondered many of the same things of late, she has come to he conclusion that they shelter each other from the storm, and when that is questioned, things start to fall apart.

Within the mountain, Diana approaches her relative Hephaestus to check on the progress of the armour she requested that he forge for her. Superman explains that the enemies that threaten them are powerful and smart, posing a much greater threat to both of them than even the Gods of Olympus, of whom he made enemies on his last visit. Diana suggests that even with the armour, they will have lost the element of surprise to the Kryptonians' superior senses. Hephaestus, though, has a solution for that. He reveals an invisible chariot that he'd designed for himself initially, but will allow them the use of it.

Soon, Superman and Wonder Woman have snuck up on Zod and Faora, surprising them with a blast of powerful heat-vision. Both Faora and Diana engage with each other, assured that they can defeat the other without the help of their male companions, who are themselves engaged with each other in battle. Superman grips Zod in his fist and warns that he will not allow him to open the Phantom Zone Gate to release Doomsday again. Incredulously, Zod responds that Doomsday is of no concern; merely a tool to destroy. He has bigger plans for Earth than destruction. He had made deals with the other residents of the Phantom Zone, and he intends to make good on it.

As the four battle each other, it becomes clear that they are nearly evenly matched, and - annoyed - Zod reminds that he had no intention of killing a fellow Kryptonian, but Kal-El is wearing those loyalties thin. He must leave or die. Naturally, Superman and Wonder Woman refuse, prompting Faora to doubt that they could resist many more of her attacks, given the hundred they have taken already. Smirking, Superman and Wonder Woman take each other by the hand, and promise to return those blows in kind. Suddenly, with the cracking sound of thunder, their armour blasts off of their bodies in an explosion that sends both Kryptonian invaders careening into the sea. Diana reminds that it would be best to take them while they're weak, and get them back into the Menagerie.

Meanwhile, on Mount Olympus, Apollo and Strife watch the goings on, and the sun god grumbles that, somehow, the Phantom Zoners failed to take down Superman and Wonder Woman, despite his having gifted them with a more effective power-boost from his solar energy, and bestowing other gifts upon them. Strife suggests that he just enjoy the drama he's caused, pointing out that there's little point in trying to get revenge on the heroes if they don't know who's behind it all. Ignoring her, Apollo sends down a blast of concentrated sunlight to energize Zod and Faora below the waves.

Soon, the pair emerges, even more powerful than before. Superman suggests that Diana try to contact the Justice League, but she insists that they stay together, and fight the villains off, and finish things. From Olympus, Apollo watches the more brutal battle that begins, promising that this is what Superman gets for messing with him - he will drown in his own blood.

Before long, both Superman and Wonder Woman have collapsed, beaten. With the window to open the Zone Gate closing quickly, Zod chooses not to waste too much more time on them, and with Faora, he carries them toward a nuclear power plant. He explains that if they place their victims within the core, they will be so shielded as to prevent the sun's rays from healing Superman, and the radiation will likely poison Wonder Woman.

Then, opening the gate thanks to the enhanced power that Apollo imbued them with, Zod and Faora open a way to Warworld, whose armies they intend to lead to victory over the planet Earth.

Within the power plant's core, Suprman explains that he has already guessed what Zod intends: an army. Unfortunately, they cannot see out, and their communicators were destroyed. They are too weak, otherwise, to get out on their own. However, Superman recalls that the Swords of Hephaestus that Diana wields are rumoured to be so sharp as to be able to split atoms - and what better place to test that rumour than within the core of a nuclear reactor? If they can split one of the Uranium-235 atoms in the reactor, they could cause an atomic explosion which could close the Phantom Zone Gate. Though Diana can't see atoms, and Superman can't wield the swords, they combine their skills to do it together. Before bringing the blade down, Superman admits that he loves Diana.

The resulting nuclear blast is impressive, and Superman and Wonder Woman are at its epicentre. In the aftermath, nothing remains of the island but ash, and in the crater, a severely burnt and irradiated Superman lies huddled with his arms around Diana, whom he wrapped protectively within his indestructible cape.

Retrieved from "https://heykidscomics.fandom.com/wiki/Superman/Wonder_Woman_Vol_1_6?oldid=1460648"
Community content is available under CC-BY-SA unless otherwise noted.