Start a Wiki
Part of the 'Superman: Doomed' event 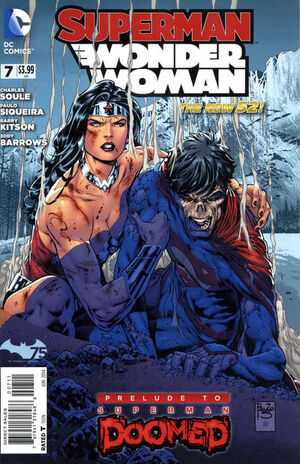 I know. You already said it. I know. We'll be together again soon.

Superman and Wonder Woman were forced to cause a nuclear explosion in order to close the portal to the Phantom Zone that was opened by Dru-Zod. Superman protected Wonder Woman by wrapping her within his indestructible cape, but he is in poor shape. Diana recovers first, seeking help on the remains of the island that they had been on. She stumbles upon a downed fighter-jet, and uses its missiles to pierce a hole in the dust-cloud above them. That hole allows the sun to shine down on Superman, and he wakes, finally. Unfortunately, before he can get to her, Diana is surrounded by three ghostly figures armed with guns. From afar, he blasts the guns to pieces with his heat-vision, forcing the would-be attackers to retreat. Though both he and Diana are weak, Superman believes that, together, they can get above the clouds into the sun, and he can regenerate. The regenerative process hurts, though. Even so, he insists on getting Diana to her friend Hessia.

As soon as Hessia sees the state Diana is in, she insists that they come inside - but she must admit that she wouldn't know how to heal a Kryptonian. As Hessia sees to her, Wonder Woman insists that Superman leave, and get better. She assures him that she knows he loves her - he had only just told her for the first time - and so he returns to the Fortress of Solitude. Hessia, meanwhile, must use a crystal with which she has a sordid history to heal Diana, calling on the power of the Amazons.

Deep in the Marianas Trench, the Ghost Soldiers, receive their orders to wake and recover Doomsday, who dove down into it not long after emerging from the Phantom Zone. Not long after he becomes aware of their submarine, he destroys it.

After some time apart, Superman and Wonder Woman reunite for some alone time. Much has happened in the meantime. Diana has become the God of War. She admits that she would like to change the way the world perceives war for the better, while she has the power to do so. Perhaps, she will be able to end war forever. However, she would rather they spend this time together doing something more fun than sitting on a London rooftop, and suggests they go to her favourite club, where a new band is playing. Upon their arrival (and after a change of clothes), Floyd - the proprietor - takes Clark aside and remarks that Diana comes to this club a lot. In all the time she has, though, she has never brought any man with her, so obviously, her decision to bring him along means something. As they dance, Diana warns that eventually a new threat will pop up, and their free time will be gone again. Clark admits that she may be right - but until then, they will always have the memory of the night they danced in London.

At that moment, Doomsday finally breaks the surface of the ocean, ready to strike.

Retrieved from "https://heykidscomics.fandom.com/wiki/Superman/Wonder_Woman_Vol_1_7?oldid=1460650"
Community content is available under CC-BY-SA unless otherwise noted.