Part of the 'Superman: Doomed' event 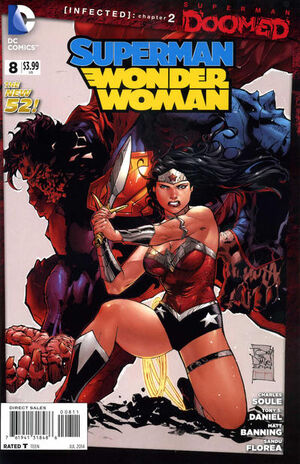 You are stronger than this disease, Clark.

In Metropolis, Wonder Woman knocks nervously on Clark Kent's apartment door, hoping he is there after he disappeared in Smallville recently. She had hoped he'd have figured out whatever was bothering him by now, but he has yet to tell her anything about it. Seeing the gouging and scrapes around the doorknob, she uses her own key, and opens the door on a wreck. Calling out, she hears Clark respond with a tone of malice that the place isn't ready for visitors. She can sense the change in his voice, and he can sense the fear in hers.

Eight hours earlier, at the offices of Clarkcatropolis.com, Cat Grant received an unexpected visitor in Clark Kent's girlfriend, Diana Prince. Despite her business, Cat dropped everything to meet this woman, wondering what it is that this Diana Prince did. Diana responded that she is a travelling consultant. Cat commented that her travel must be why Clark had never mentioned her. In any case, Diana had come to see if Cat had noticed anything strange about Clark of late. Cat demanded proof that Clark and Diana were in a relationship, and so Diana provided a voice-mail message that both women agreed didn't sound like Clark, even though it definitely was his voice.

Cat admitted that recently, Clark hadn't been holding up his end of their partnership, so she was forced to pitch the story of Superman's absence since killing Doomsday. Clark responded with animosity, refusing to take part in the story, insulting her, and storming off. She had never seen him behave like that.

Now, Diana reaches out, wondering just what happened to Clark. She can see that he's sick; that he's infected. He responds that he knows that he's infected, and poses a question to her: why doesn't she ever ask him for help with his problems? He has always been open with asking her for help. She had only even told him about her conflict with the First Born after it happened. She could have died.

He takes her Lasso of Truth from her, and wraps it around his own neck as he reminds her that she hasn't said she loves him back after he told her he loves her months ago. He warns that she will have to kill him soon. HE knows what he's becoming, and he'd rather die. Now may be the last chance, while he's still strong enough to let her do it.

Six hours earlier, Lois Lane received a call from Diana Prince, wondering if she'd seen him recently. Lois responded that she didn't have time to talk about that, instead begging Diana to tell Perry White her location and ask for help. Before she could finish her call, her car was stopped on the highway by the military, who placed her under arrest. To her surprise, though, Diana showed up.

Diana simply glared at one of the soldiers and knew his mind. As the goddess of War, she knows all soldiers. She came to see that Lois had broken into their military mainframe and when she was caught, her eyes had been glowing. Diana found this suspicious, but asked the soldiers to release Lois anyway. To Lois' surprise, they complied. Once alone, Diana reiterated her need to know where Clark is. Amid stumbling professions that there was no hanky-panky between she and Clark, Lois confessed that Clark had called her late the night before sounding drunk.

Two hours ago, Batman was approaching Metropolis, knowing Superman was there, somewhere. He had deduced that Clark would go to the place that he felt most human, and with Smallville in ruins, he would surely have chosen Metropolis. Suddenly, he was surprised by Wonder Woman thumping down onto the nose of his in-flight Batplane. After landing, they determined that both of them were looking for Clark. He explained that he had collected a sample of Clark's blood from Smallville, and it was clear that the DNA in that sample was identical to Doomsday's DNA.

Clark had purposefully inhaled all of the Doomsday spores for the sake of everyone else - he must not have realized he'd transform into Doomsday himself. Anyone else who had inhaled it would certainly have died. Batman suggested that their one hope would be that Clark might be able to resist the spores' psycho-reactive qualities. Batman recommended that Diana search Clark's apartment. She hadn't even thought to look there.

Diana refuses to kill Clark, but he doesn't intend to give her a choice. He attacks her, and the commotion draws Batman's attention. He demands to know what's happening, but Diana warns him to evacuate the building and leave it to her. Reluctantly, Batman agrees to let her take Clark on by herself. Diana turns to Clark and insists that he is not yet at the point of no return - but she will see that he can't hurt anyone if he reaches that point. The man worthy of her love, though, is strong enough not to get to that point. She tells him of how Batman suggested he could overcome it with his mind, and so he tries to resist. The force of that effort causes him to scream at such a pitch that every window on the block shatters.

He succeeds, though, in returning to his old self - for now. He can feel it trying to come back already.

Retrieved from "https://heykidscomics.fandom.com/wiki/Superman/Wonder_Woman_Vol_1_8?oldid=1460652"
Community content is available under CC-BY-SA unless otherwise noted.