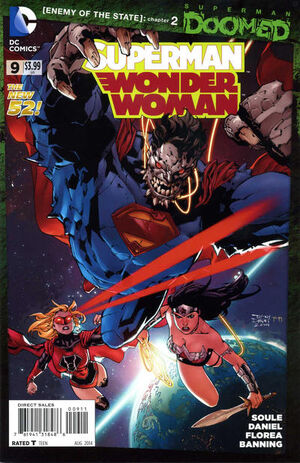 You don't get it, blue. I'm not some bad guy, something you can punch. I've always been here, and I'll always be here.

Appearing in Enemy of the Sate, Chapter 2: "Escape"Edit

Synopsis for Enemy of the Sate, Chapter 2: "Escape"Edit

As a cloud of Kryptonite mist spreads through the Earth's atmosphere, the radiation threatens to kill what little remains of Superman's Kryptonian DNA, leaving only the so-called "Super Doom" creature, whose only goal is destruction. Clark is intent on finding a way to regain control of his body, but it's going to take a lot of luck to see it done.

Nearby in Brazil, Wonder Woman is sure that Superman's ability to fight the Doomsday infection is being impaired by the Kryptonite mist, and she begs her friend Hessia to help. Though she worries for her own safety, not to mention her ability to heal a Kryptonian, Hessia agrees, donning magical armour to protect herself from Superman's assured attack.

Diana is disturbed, though, when she realizes that Hessia intends to kill him, for the sake of the planet. She may be a healer, but she intends to treat the patient she can save - and in this case, that happens to be the world. To prove her point, Hessia leaps onto Superman's back and whispers into his ear the truth that it was she who revealed his relationship with Wonder Woman to the world. She had thought they were good for one another, but she was wrong. Angrily, Clark allows the infection to take over, and knocks her back. When he speeds toward her to make a killing blow, Diana intervenes, wrapping her Lasso of Truth around her opponent, and swearing that Hessia must be wrong.

She tows him out above the mist, into the outer atmosphere, until she can go no further. This far out, control returns to Clark, who warns that he can't go back down, or he'll change back. Diana, however, cannot survive so high up for so long, and must return. Clark asks her to apologize to Hessia on his behalf and warns that many things have been left undone on Earth. Lois Lane, for example, seems to have been psychologically affected by the ordeal, and may be dangerous. Diana assures him that he is not leaving the Earth unprotected, and urges him to go somewhere that he can get control without hurting anyone.

As Superman flies away from the Earth, he believes he's getting free of the infection. However, when he feels a blast of red energy, he realizes that it will not be so easy. Supergirl and the Red Lanterns have come to ensure that he is stopped, and their attacks bring the infection back to the forefront. Powerfully, he knocks them back down into the arctic, where Kara begins to feel the effects of the Kryptonite mist.

Before they can rally, Guy Gardner finds himself ensnared in the Lasso of Truth. Under its influence, he explains that as Red Lanterns they are bound to protect the planet, and word of the Teen Titans defeat in St. Louis made it clear that Superman needed to be stopped. He admits that he doesn't wish to see Superman stopped - because all he wants is to see the old Superman back. Understanding that the Red Lanterns have learned to master rage, Diana suggests that they go back to Superman and try to help him - but if they can't, they'd best let him go.